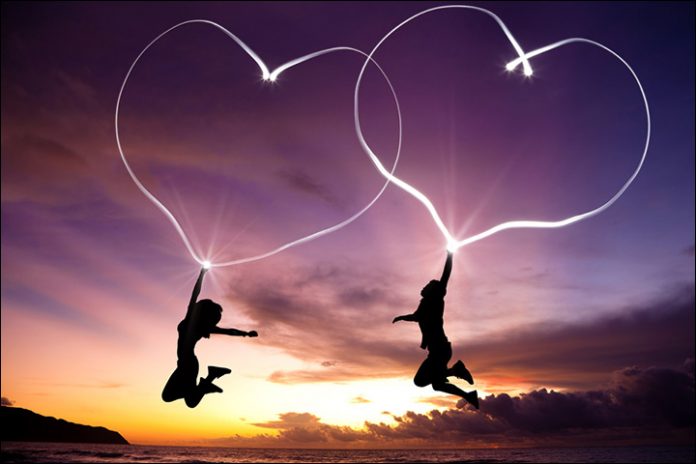 “True love is a strong and lasting affection between spouses or lovers who are in a happy, passionate and fulfilling relationship. An example of true love is the emotion shared between a couple who has been married for 40 years and who are still passionate about each other and care deeply for each other.”

Even if you’re in or you’re out on the subject, at least you’ll know what to look for and how to handle it should True Love find you anytime soon.

Humans are no different. Features that are universal to our species provide clues to who we are and where we came from. The emotion of love is no exception. Love is a human emotion that has been documented in human groups across the globe (see Hughes, Harrison, & Gallup, 2007; Fisher, 1993). Further, romantic partners who report themselves as deeply in love consistently show similar neuropsychological activation in cognitive neuroscience studies of the love experience (see Acevedo et al., 2012). The nature of love in humans is a window into our ancestral past.

The evolutionary psychology of love provides an interesting example of how evolutionary principles can be used to shed light on basic aspects of who we are (see Geher, 2014; Geher & Kaufman, 2013).

We Are the Slowly Developing Ape

On the other hand, some species are “altricial,” meaning that their offspring are not particularly advanced at birth—and that they need a lot of time and care in order to develop appropriately. Think about humans: We are not like deer! Our offspring are not walking on their first day. In fact, we’re lucky if our offspring are walking in the first year. And even then, anyone who has ever watched a one-year-old knows full well that they need you to be with them every step of the way. Humans are a classic altricial species: We are a slowly developing ape—and there are good evolutionary reasons for this.

In a classic theoretical piece in the evolutionary sciences, Robert Trivers (1971; 1985) developed Parental Investment Theory, the idea that the amount of required parental investment in a species should map onto the social and mating-related behaviors of that species. If a species is relatively precocial, we would not expect long-term mating to evolve. Trivers was correct in this prediction across a wide range of species. When you consider a species with quickly advancing offspring, you do not find long-term mating, monogamy, or anything of the kind. Bucks and does, for example, spend very little time together.

Further, in species with relatively altricial offspring (such as birds like the emperor penguin or the North American robin), long-term mating systems may well occur. This is because in an altricial species, having multiple parents around to help provide resources and raise the offspring can be critical. This pattern is often called “bi-parental care,” and it’s a hallmark of species with altricial young. You can probably see where this is going: Yes, humans have altricial young, and so humans have long-term mating systems and things like monogamy.

The Evolutionary Function of Love

Love within a pair-bond is clearly an evolved product of high levels of parental investment in humans (see Fisher, 1993). Love is marked by psychological processes such as passion and intimacy with a specific partner. It is also marked by physiological processes such as increased levels of oxytocin and autonomic nervous system arousal specific to being in proximity to one’s partner (see Acevedo et al., 2012). Love motivates you to be near your partner. To be with your partner. To help your partner. To be kind to your partner. And all of these things make so much evolutionary sense when you consider them in terms of bi-parental care. Offspring with two doting (and cooperative) adults around to help them simply have an advantage over offspring with only one doting adult around. Love evolved to provide the emotional framework for maintaining pair-bonds, largely because we are an altricial species with relatively helpless young.

From an evolutionary perspective, love ultimately exists because it helped our ancestors form strong pair-bonds that facilitated successful child rearing. So when you find yourself in discussions about whether love is “real,” I’d say that from an evolutionary perspective, the answer is absolutely. Love is a basic feature of human mating intelligence (see Geher & Kaufman, 2013) that evolved to solve very specific adaptive problems in our altricial species. I’m not sure if that’s romantic, but I’m an evolutionist, and that’s what I’ve got.