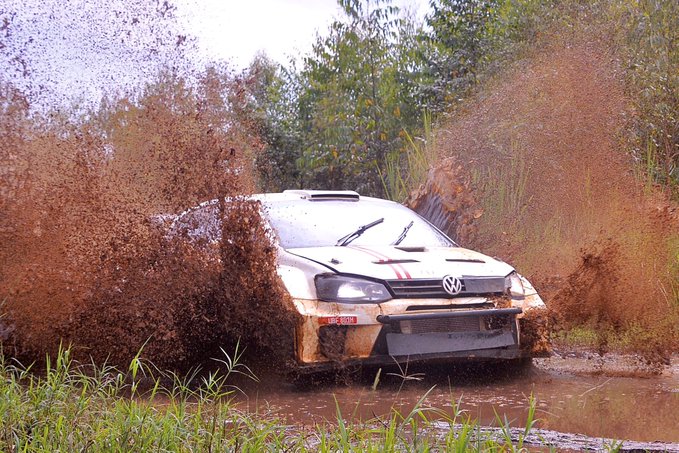 Rajiv a son to the City tycoon Dr. Sudhir Ruparalia turned a budding rally driver, on Sunday May 26 came second, in the National Autocross, Enduro and 4×4 Challenge championship after clocking a record time 10:44 minutes in a speedy and thunderous racing at Sisa Zion estates greater Entebbe.

Over fifteen crews signed up for the weekend Autocross do and race at Zion Estate, Sisa that was won by Ronald Ssebuguzi, in 10:04 minutes. Whereas Round one winner Jonas Kasiime came third on 10:54 minutes.

From the strength of the Double trouble warrior VW POLO Proto Car, Not even the rain could slow it down; “Double Trouble” was all charged up in training. THE HOMELAND MEDIA PHOTO

Rajiv Ruparelia revealed to the media that, he loved racing right child hood and what he is doing now it’s a dream come true and Ugandans must expect the best racing skills from his RR Double Trouble Team.

“I decided to join rallying just to feed my strong passion for Motorsport to make people happy and also I wanted to have fun, rallying is not something you just wake up and take on. I decided to join a rally school in South Africa to get myself equipped with some knowledge and experience,” Rajiv revealed recently.

Rajiv Ruparelia says he decided to go to South Africa to study and understand more techniques and skills about racing and making it impactful to community and see how to improve the motor sport game with vigor and professionalism it requires to make it boom. Sports of any kind  has always been in me and i am competitive and will be compete to inspire more people of my generation to love this game and give it momentum it requires.

Cool as the “Double Trouble” Budding Driver Rajiv Ruparelia had a moment with the media after the team’s debut. THE HOMELAND MEDIA PHOTO

Rajiv Ruparelia and his RR team gaining strength of the Double trouble warrior VW POLO Proto Car, “Double Trouble” was all charged up Ready to race. THE HOMELAND MEDIA PHOTO

He said that, “the Rajiv Ruparelia Rally Team (RR) is a brand that is not just about rallying but also supporting the community.

The team will leverage on its connection with Ruparelia Foundation and Rajiv Ruparelia Scholarship at Victoria University to give back to community.” By supporting needy people get the best in sports, education, entertainment and health.