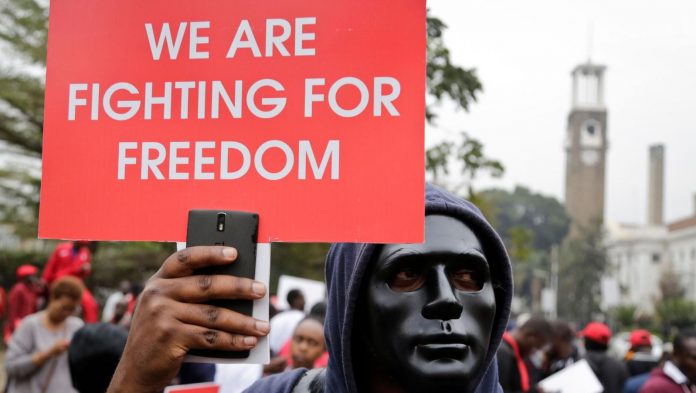 The #FreeBobiWine campaign is now among the top 5 trending social media platforms hashtags in Africa mainly on Twitter and Facebook. This was created following the arrest of the Kyaddodo East Member of Parliament Kyagulanyi Sentamu Bobi Wine in Arua and charged with treason that many believe to be fabricated and Imaginary Charges.

The #FreeBobiWine campaign has now seen many sharing it on their Social Media walls amazingly that the Kenyans have dominated by today’s morning. It is more trending in the Kenyatta Land than Uganda where it started from. It seems that the Migingo matters have been taken aside and held for any time later.

Many pin the famed photo of the musician turned politician that portrays him raising the hand of freedom captioned;

“See what they are doing to him, Kenyans lets rise and shun dictatorship… @UKenyatta sanction @KagutaMuseveni its shame for an African country” as others followed.

As all this is happening, the info coming in from those very few that have had a chance to look at the now taken to be ‘Freedom Fighter’, the legislator’s condition worthy being discussed about. It is believed that he was badly beaten and smashed beyond recognition. By the time he was presented to Court, he could not talk, sit, walk and can hardly appreciate what is happening around him.

“Mr Kyagulanyi’s health is in the dire state… He is in great pain. He can’t talk, he can’t walk, he sits with a lot of difficulties, his face is swollen and he cannot see,… He couldn’t speak when the charges were read to him and I believe he didn’t know what was going or understood the charges read to him.” Medard Segona, one of his lawyers, said.

In the same incident during the scuffle that followed Bibi Wine’s arrest, the Life of his driver, Yasin Kawuma was claimed by a gun shot from one of the police officers in what many of the ruling government critics believe was a plot to kill the Honorable him self on the spot.