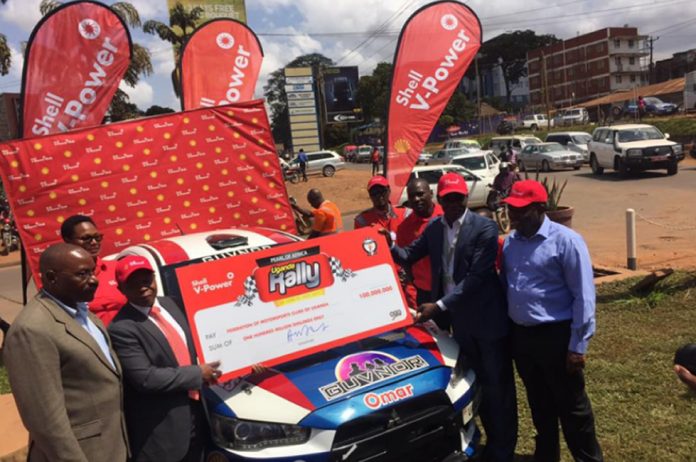 Vivo Energy Uganda, through its premium brand Shell V-Power, has once again announced a sponsorship package worth Ushs 100,000,000 towards the organisation of the Pearl of Africa Uganda Rally.

The announcement was made at the launch of the 2017 edition of the Shell V-Power Pearl of Africa Rally at Shell Bugolobi.

Speaking during the unveiling of the sponsorship, Vivo Energy Uganda Managing Director, Gilbert Assi said: that Vivo Energy is delighted to continue with the support of the Shell V-Power Pearl of Africa Uganda Rally.  The rally will give the drivers a chance to experience Shell V-Power – the fuel with the highest-octane levels in the market today, giving them the best performance and the formula for driving excitement

Shell V-Power is a premium unleaded fuel with a high-octane index of 95. It contains cleaning and protective elements that both prevent the build-up of carbon deposits in the intake valves and fuel injectors while cleaning any deposits that already exist. It also acts to prevent gunk and corrosion.

Shell V-Power can remove substantial amounts of build-up. Once it has had some months to improve engine cleanliness, there are ongoing benefits, even if you return to standard fuels.

The Federation of Motorsports Clubs of Uganda (FMU) President, Dusman Okee, said that the contribution from Vivo Energy Uganda will help the event continue to be successful. “We thank Vivo Energy Uganda for its continued and committed support towards the motorsport fraternity. As a federation, we are working closely with all stakeholders to host another successful event,” said Okee.

The Shell V-Power Pearl of Africa Uganda Rally is one of the eight rounds of the Federation Internationale de l’Automobile (FIA) sanctioned African Rally Championship, that will run from 30th June to 2nd July.