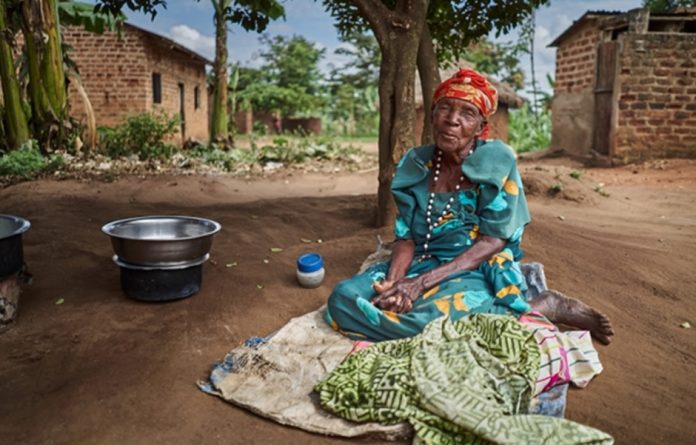 Dirty, smelling and soggy bedding, is all that 79-year-old James Mukwaba can afford in Mubende Hospital’s ward.  The hospital gave him a mattress on the floor of a congested ward. He is using his ragged, unwashed cloths for bedding as he undergoes treatment.

His only son abandoned him in the hospital, seven months ago.

Mukwaba is one of the 1.5 million elderly people back home in Uganda.  A 2006 report on the last census indicates that 4.6% of Ugandans are 60 and above.  Yet there are no special law to protect and provide for them, despite of the fact that they started paying taxes to the government as much as five decades ago.

Elderly men and women like Mukwaba are being treated like any other ordinary Ugandans who can work and earn a better living.  Why shouldn’t Ugandans be scared of old age; without social insurance, no protective law, no income but poverty, disease and frustration in abundance?

The state minister for the elderly and the disabled, Sulaiman Madada, says the government is still drafting a policy to cater for the elderly.  “There is no special law for them as of now,” he says.  “But government takes great attention and recognition of our aged people.”

Herbert Baryayebwa, the commissioner for disability and the elderly in the gender ministry, says his ministry is trying to help after the government realized that unlike other vulnerable groups like orphans, women and disabled persons, the elderly do not directly benefit from public programs.

He says that with financial support from the Department for International Development, the ministry conducted a research to find out the specific needs of the elderly. The findings are now being used to design interventions, taking into account the gender dimensions as well.

The research showed that older people are disillusioned, saying they have been excluded from government program, isolated by members of their own families, and denied access to medical care.  Finding it difficult to work, many have no income.

Many elder people back home lack opportunities for any active participation in society and the economy, and their minds deteriorate as a result.  They can’t access essential drugs and free medical services.

Media reports show that many elderly are neglected, abused, face discrimination, and are ill-treated in the hospitals, taxis, buses and villages.  Many have lost their children to war and HIV/AIDS, and cannot rely on traditional family support, which has often collapsed under the growing market economy.  Instead of being supported, many elderly are actually caring for orphaned grandchildren. About 50 percent of Ugandan orphans, according to the 2005 Chronic Poverty Report, are under the care of grandparents.

Mzee Moses Atwooki, 80, says his biggest problem is lack of dignity and respect from society, especially for personal care needs, inappropriate medication designed more to subdue patients than treat them, and rushed discharges from hospitals.

In the past, Ugandan cultures had an informal family system that took care of the elderly, giving them an important role in society, dignity and emotional support.  Modernity has left them at the mercy of their offspring for those who are blessed to have them.

Despite the state of the elderly, Madada says that the Ugandan government has not ignored the elderly.  “In all our activities as government, we ensure that the old people are not left out,” he told Ugandans Abroad.

Malada added that government is planning to start an automatic cash transfer scheme, targeting “for very old people.” A selected number of adults in the country will get about sh 20,000 per month, under this arrangement (less than $10 USD).

The automatic cash transfer scheme, the Labour state minister Emmanuel Otaala says, will basically target “old people that were not in the formal and informal private sector.”

“There are those old people that have greatly contributed to this country’s development through taxes and other areas, but are not getting pension or other benefits,” Otaala says, such as informal private sector workers under NSSF.  He added that the “government will make sure that those without any such support are facilitated monthly.”

Otaala explained that the scheme was initially supposed to cover six districts, but was recently expanded to “cut across the whole country.”  But the whole public scheme’s idea is still in the preliminary stages of being drafted.  Otaala says it will be tabled to the Cabinet soon.

The government is ‘picking a leaf’ from Lesotho and South Africa.  Syda Bbumba, Uganda’s finance minister, Otaala, and the late Omwony Ojok traveled to these countries to study the scheme last year.  Otaala says it has shown results in these countries, and “can easily work out here.”

Madada also feels that affirmative action principles in our Constitution shouldalso  equally cater for the elderly.  There is also the Equal Opportunities Act, which covers the elderly.

Other activists argue that government should enact laws protecting old people’s rights and form a national council of elder people.

An old saying goes that: “The bush rat gave milk to its children when they were small. When it [grows old], it [then] drinks from [its children’s] breasts.” Can we now feed the old ones?

In many countries, the family is still expected to care for the elderly, but rural flight to the cities, international emigration, AIDS, poverty and other social trends are altering family structures and traditional support systems.

The international non-governmental organisation, HelpAge International, estimates that over six million children in Sub-Saharan Africa are cared for by their grandparents.

But not all old people have families to provide for them. Some other governments are trying their best to lend their hands to its senior citizens, so can they retire gracefully and live a dignified end to their lives.  A few countries in sub-Saharan Africa, including Mauritius, Botswana, and Lesotho, have universal pensions that give allowances to everyone over a certain age.

In South Africa and Namibia, pensions are “means-tested” – or provided to only those, for instance, who have no income and those below the poverty line.

Until now, governments have been slow to provide pensions for the elderly, arguing that it would be too expensive.

About 1.9 million older people receive a pension in South Africa.  Figures by HelpAge International show that the pensions there have helped reduce the scale of older people’s poverty by 94 percent.  On the other hand, having a pensioner in the family has been shown to reduce a household’s probability of falling into poverty by 11 percent.

Zimbabwe, Zambia and Kenya, like Uganda, are the other countries debating similar legislation– including constitutional guarantees, which aims at protecting the elderly.  In 2006, South Africa passed The Older Persons Bill, which among other things extends services and protections to all races.

The bill also covers the people who live at home in rural areas.  In one provision of the law, perpetrators of violence against the elderly could be removed from the home.

The African Union and the United Nations both have Plans of Action that call on member states to develop policies that protect older people.  And, the UN’s Millennium Development Goals aim to cut poverty among the elderly in half by 2015.

Over 35 million people in sub-Saharan Africa are estimated to be over 60 years old.  Figures from population agencies say the number is expected to double by 2030.  The growing number of senior citizens is pressuring African governments and international agencies to come up with ideas to provide for the old ones.

What will we see in the future for aged citizens?

Government has said that it will start paying a monthly allowance to all old people, about sh30,000 every month.  But, this might have been a political gimmick or tragically empty promise.  Let us leave time to tell.

The elderly people don’t only need financial help, but also love and respect from their dear ones, activists say in Uganda. The core family values, which have been drowned out in the whirlpool of a so-called nuclear lifestyle, must be redressed through vigorous campaigns.

Old age has a dual dimension of challenges and opportunities that can give society their vision of life.  While elder people have sometimes been seen as burdens on society, some may finally recognize them as assets to our country, which should be tapped and appreciated.

If you find this information helpful, please

Zari And Diamond Are Back Together, Former Reveals Why: