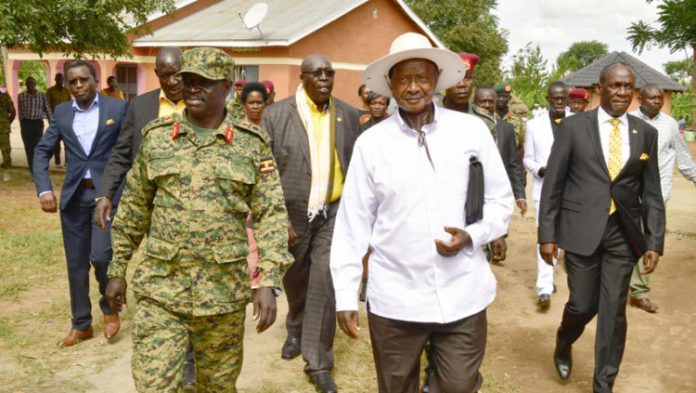 President Yoweri Museveni has urged Christians in Kalaki District in particular and Uganda in general to implement the mandate bestowed upon them by God of developing their areas and the country at large by harnessing the gifts of nature.

“From the very beginning, God had assigned the human race, that He made in His own image, to have dominion over all things on earth. Praying is good but does not abandon your assignment and you only think that prayer will do what you should do. Do your work and pray that God helps you to execute what he told you to do,” he counseled.

The President made the remarks yesterday (Saturday 30th November 2019) at the thanksgiving ceremony that was organized by Lt. Gen. Peter Elwelu at his home in Anyara Parish in the new district of Kalaki in Teso Sub-Region.

Hill Water
The occasion that also attracted Teso cultural leader, Emorimor Augustine Osuban, marked the opening of the Temple of Elohim – a place of worship – that was constructed by Gen. Elwelu, who is Commander of the UPDF’s Land Forces.

The ceremony that was attended by a massive congregation, was characterized by several activities that included, according to the host Gen. Elwelu, the re-union between the people of Teso and their kins of Western Uganda, installation of President Museveni as liberator of the oppressed people as well as a special prayer dedicated to the people of Teso.

President Museveni, who was commenting on the role of prayer, called on all Christians to implement the mandate God gave them coupled with prayers. He stressed that all kind of work should be done with humility, not with pride.

“When we bring electricity here and we chase away darkness and water in the swamp is brought in homes, that means we are establishing control over nature. But pride is not what God wants. When you do good things, don’t claim them; give glory and honour to God,” he said.

Regarding patriotism, President Museveni agreed with Gen. Elwelu’s comments that Ugandans were not like their neighbors who strongly love their countries.

“But these wonderful Ugandans, they like to be Iteso, Langis, Banyankole, Baganda and yet, especially under the NRM, things have improved. Elwelu was saying many things and one of the things he said which I know, is that you people have a problem of being Ugandan. That one, among the many things he said, is definitely a fact. That is very dangerous for us,” he noted.

Commenting on the criticism leveled against UPDF’s role in controlling bad fishing activities, President Museveni, who asked all those engaged in the bad practice to stop it, explained that the Army was brought in to control the dishonesty of the people who were catching immature fish. He added that the exercise helped in restoring the fish population in the lakes as the original mistake was made by the people themselves who depleted fish stocks from all fresh water bodies.

President Museveni pledged support to the families of the late Elyau and late Denis Ecou, who were NRM cadres. He promised to construct an institution in memory of the late Dennis Ecou.