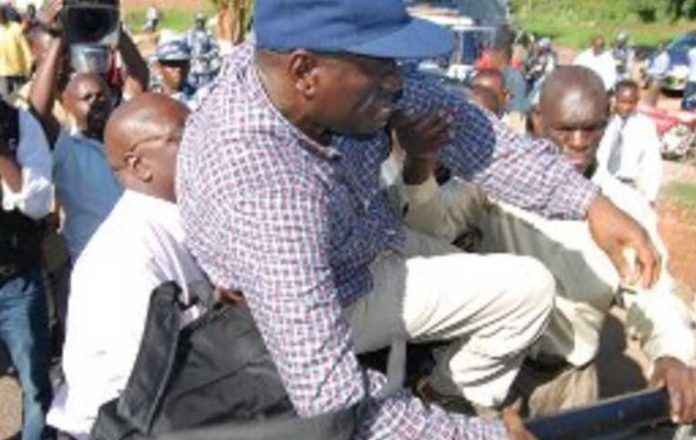 FDC president Kizza Besigye has said the proposed constitutional amendment to deny bail to rioters and economic saboteurs is a government ploy to incarcerate him “for a long time”.

During a press conference at his Kasangati home in Wakiso District on Tuesday, the former presidential candidate agreed to conditional talks with government but dismissed allegations that he is receiving foreign funding to organise the walk-to-work demonstrations.

“What money is needed for demonstrating? We are walking on foot and don’t even need money for taxis,” he said in response to a question from this newspaper. “Even if there was need for some little money, why would we have to go for it outside? There is a mistaken belief that Ugandans cannot support their own activities. We have never got money from outside.”

Speaking minutes before taking an uninterrupted drive through inner Kampala in more than a month, Dr Besigye, who was yesterday charged at Nabweru Court with participating in unlawful assembly on April 28, said the government is “anxious” to detain him.

He vowed to continue with the walk-to-demonstrations called by Activists for Change pressure group over soaring prices of food, fuel and other commodities.

“What I have been hearing filtering through informal channels is that they are anxious to detain me for a long time but they still have to pass the law abolishing bail,” Dr Besigye said a day before Magistrate James Erimu granted him and his co-accused Herold Kaija each Shs5 million non-cash bail.

President Museveni told journalists on May 12 that he would work to introduce a constitutional amendment Bill as the first business for the 9th Parliament, which convenes for its maiden session this morning, so that suspected rioters, economic saboteurs and sexual offenders serve a mandatory six months remand before they can get bail.

This, he said, will remove the temptation for judicial officials to offer bail to such “criminals”. Under Uganda’s laws, suspects are presumed innocent until proven guilty and legal brains argue that constitutional bail denial would amount to unjust punishment and miscarriage of justice.

“It is more demonstration of a regime that is making repression an official policy like Apartheid in South Africa.” On Tuesday, Mr Museveni said disruptions by demonstrators cause apprehension among vendors who fear their wares could be looted. “This will not continue,” he wrote. “We are seeking for everybody’s understanding as we end this criminality using all the angles of the law.”

Dr Besigye said the proposed talks with government should be national in character, involving civil society and faith-based organisations and cultural leaders. He said government should first “recognise there is a crisis” and structure the dialogue so “right people are at the table” with clear views about implementation of its agreements.