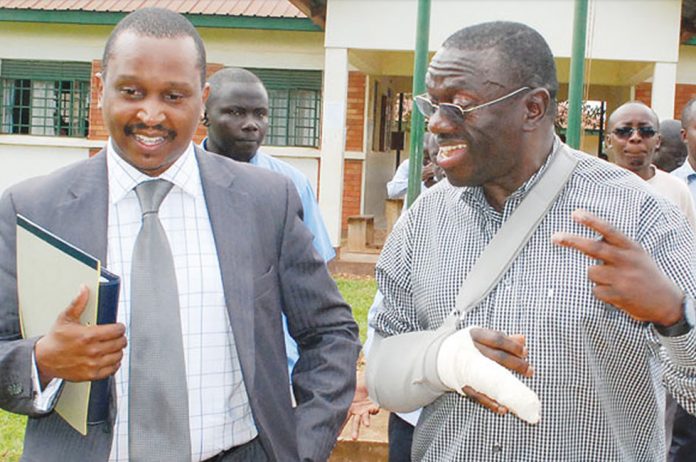 Addressing journalists shortly before his aborted trial at Nabweru Court yesterday, Dr Besigye said he will continue to peacefully object to President Museveni’s government until it addresses problems of the ordinary man.
“We want to object to government peacefully without fighting because we know very well that guns haven’t brought in peace in Uganda,” Dr Besigye told journalists yesterday.

He added: “Museveni has a million advisers but they haven’t helped him much. My advice would be for him to listen and respect the people of Uganda.”
Dr Besigye was on Thursday welcomed by thousands of supporters from Entebbe Airport to Kampala after he returned from Kenya where he had been undergoing treatment for injuries sustained on April 28 when security operatives pounced on him as he drove to work. He suffered partial blindness then.

Long trek
His homecoming, however, coincided with President Museveni’s fourth swearing in ceremony at Kololo attended by nine presidents from different countries.
It took Dr Besigye 11 hours to arrive in Kampala for a journey that lasts an hour, amid heavy gunfire and tear gas explosions which intensified as he got closer to Kampala.

Yesterday, Dr Besigye asked the African Union to investigate rising cases of police and security operatives beating up people. He criticised the continental body for letting President Museveni rule Uganda yet they observed elections which were not free and fair.

“Everybody said the elections were not free and fair, where is the legitimacy of somebody leading Uganda if it is not through the will of the people? Part of the frustration you see today is because people rigged the election,” he said.
He said organising free and fair elections was possible.

Case adjourned
Meanwhile, court yesterday set June 15 as the hearing date for Dr Besigye’s case in which he is charged with inciting violence. Dr Besigye appeared before Magistrate Justine Atukwasa in court chambers where the press and the public were denied access.

The opposition politician insists the charges, borne out of his walk-to-work protests, are “fake”. His lawyer, Mr David Mpanga, said they had been informed that the state was almost through with its investigations.