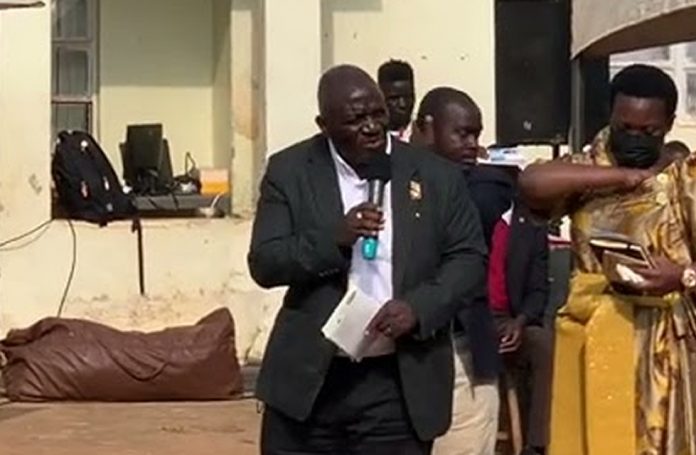 Katumba Wamala offered the most intriguing political speech of his life, utterly divorced from the NRM conformist script. It was a point-by-point explanation of why he wishes Bobi Wine can run this country one day. The minister infused his speech with advice on what qualities a successful leader should have.

“Mister Bobi Wine, I wish that one day you govern this country…” he said to bursts of applause and a standing ovation from Bobi Wine and other excited mourners.

“…But I warn you that if you prioritize tribes or tribalism, you will not manage Uganda,” he said at the funeral of fallen industrialist Sembuya, the founder of Sembule Group of Companies

“I want to caution you that we have one country called Uganda. Whether you are a Rwandan, Karimojong, or an Acholi present here, we are all in a country called Uganda. If we do not front the word Uganda, we shall be going back every time,” he said, adding, “I am begging you to remove tribalism from our lips. Here in Buikwe, we are a united people. Have I lied? You are united people here. My father and grandfather hail from here. Here in Buikwe, we are united.”

Katumba’s speech was a response to Bobi Wine’s stinging accusation of the ruling NRM government’s failure to help Sembuya when he begged frantically for cash to rescue his crumbling business empire yet foreigners were quickly helped.

Sembuya had by 2010 piled up a huge debt, which stacked the odds against his business empire. By 2014, having failed to secure a government bailout, Sembuya lost Sembule Steel Mills, then valued at Shs 27 billion, to a bank that had lent him Shs 10 billion, according to media reports.

His dilemma has always come up as an example of a lack of government strategy to grow and develop local industrialists. Since then, and until as recently as 2019, Sembuya was asking the government for a bailout of $5 million (currently Shs 8 billion).

Bobi Wine said, “Amina Mohammed Hersi, the founder of Atiak Sugar Factory, received a Shs 62 billion financial bailout. Finasi Construction Limited in charge of constructing Lubowa Specialized hospital received Shs 1.4 trillion of taxpayers’ money. To date, we are still wondering what happened to that money! When it came to our Sembule, he wasn’t rescued by the government. Our elders, I am telling you this because we want you to know these things.”

“It was you who took us to school to study. When I was in school, there was a subject called Civics that taught us how government operates. Call it politics and leadership. It was removed because they want you to remain blind. The majority of my age mates know there was Political Education in our schools but it was removed because they don’t want us to see where the nation is going,” he said.

“When some of our parents were younger, they loved current affairs. They went to war because they felt that it was through killing people that they could reclaim the nation. It is sad that over half a million people lost their lives,” he said.

“It is the same situation we are in at the moment. Our children are abducted and killed. Between November 18 and 19, 2020, over 150 people were killed. No one has been convicted in court yet. At the moment, your children and grandchildren hailing from Buikwe, Gomba, Lugazi, and elsewhere are rotting away in jail without any charge because they supported one of you and one of their own. It is absurd that it’s our mothers and fathers that are upholding our oppressors,” he said.

“Malcolm X said nobody can make you a slave without your permission. It’s us that permit them. You speak unarmed, without any profanities, without doing anything wrong, but when you reach somewhere, they beat you up and pluck out your nails. Your crime is enlightening your colleagues. Things were not like this, our dear parents. We are your children or friends of your children and we shall live with them in this country when you are long gone. What kind of Uganda do you want to bequeath to us? Even a newborn baby has a debt of one million shillings on its head be- cause money is borrowed and stolen.”