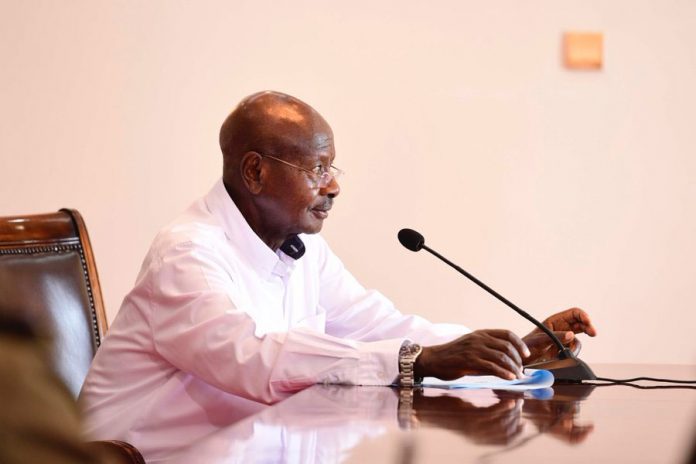 President Yoweri Museveni has ordered security organs to strictly enforce the directives on restrictions to deter coronavirus (COVID-19) spread.As part of the presidential directive, Museveni has instructed the Police to tighten enforcement of the curfew for commuter motorcycles bodabodas, private and public transport, among others.

The curfew for bodabodas begins at 6:00pm whereas that for private vehicles and public transport is 9:00pm.

The President’s message was announced yesterday by the information minister, Judith Nabakooba, during a press conference in Mityana town.

Nabakooba said the President’s fresh directive follows a spike in the COVID-19 cases and deaths.

“In one month, we have 29 deaths and the number continues to grow every day.
This is about one person dying every day,” she said.

Despite a spike in COVID-19 cases, she said, bars are illegally operating and people are increasingly attending weddings, funerals in large numbers without face masks and social distancing.

At the same event she hosted at Enro Hotel, the minister lauded Ugandans who are voluntarily helping enforce the COVID-19 standard operating procedures (SOPs) among the citizenry.

“We have seen bodaboda leaders, taxi operators supporting the Police in enforcing the COVID-19 guidelines. As a result, there has been an improvement with passengers embracing the guidelines,” she said.

Nabakooba urged other sectors such as markets, arcades and individuals to embrace the system of community policing.

Reopening schools, worship placesNabakooba said the President has also instructed the National Task Force on COVID-19 to review the possibility of a phased reopening of schools starting with candidate classes and clinical medical students.

The task force will also review the status of other sectors such as places of worship like mosques and churches, mobile markets, tourism and the airport.

Other sectors to be reviewed include the entertainment industry such as bars, cinemas, nightclubs and sports events.

He added that they will mount roadblocks for bodabodas, private and public transport, not excluding pedestrians without masks.

Following the lifting of the lockdown, Enanga said, certain roadblocks in the urban centres were removed to allow traffic flow smoothly. He said they would re-introduce them.
On the arrest of politicians, he said, all regional and division Police commanders have been instructed by the director of operations to arrest whoever breaches the COVID-19 SOPs.
Police officers who fail to implement this, he said, will face disciplinary action.

“We have also deployed the Police Professional Standards Unit to monitor the Police stations or division failing to enforce the SOPs. Defaulters will be held accountable and disciplinary action will be taken,” he said.

He added that implementation of the presidential directive will be conducted jointly with other security organs, such as the army.

What other players sayXavier Ejoyi, the country director of ActionAid, blamed government officials for the laxity on implementing the presidential guidelines on COVID-19.

“Ugandans are becoming relaxed because they have been betrayed by politicians, including senior ministers.

How will a common Ugandan respect social distancing when ministers are holding political rallies?”

“Ugandans had respected the rules, until the political season started where ministers walk among crowds without masks on,” he said.

To restore respect for SOPs, Ejoyi said, the Government should arraign ministers in courts of law over faulting of the guidelines.