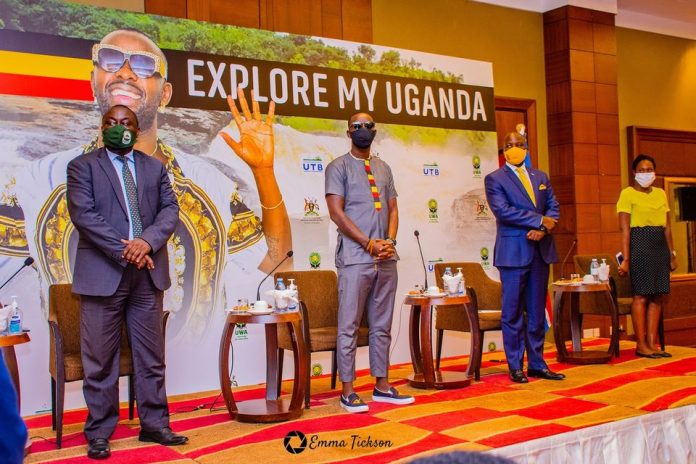 This afternoon is for Edrisa Musuuza alias Eddy Kenzo. The MTWA today held a Media Conference on the reveal of Eddy Kenzo as a self motivated and willed Tourism Ambassador, who will join hands with the Tourism Sector and the country at large to revive the marketing of the country’s’ tourist attractions and the destination at large on the international scene. The international star has scooped an ambassador deal with the Uganda Tourism Board, a government parastatal responsible for promoting Uganda’s tourism.

This ianugural ceremony ws presided over by the state minister for Tourism, Wildlife and Antiquities, Hon. Kiwanda Ssuubi. While unveiling the ambassador, the Hon state Minister has emphasised on how marketing Uganda is not a one man’s responsibility. He asserted that while there have been other personalities (some whose contracts of engagement expired) that have taken on showcasing the beauty of the Pearl on their own personal made fame, more People of Eddy Kenzo’s fame and following are a resource to utilise in marketing our own country.

Kiwanda noted that in such a dull period of the pandemic, A voice of hope and  reassurance is what we need to soldier on, and Eddy Kenzo’s Music has been that Instrumental voice that’s restored hope, built confidence and showcased our strength to move forth(Sitya loss, Stamina, Tweyagale etc)

In his remarks, Eddy Kenzo emotionally narrated on how Hon. Kiwanda called to ask him how much it would take him to market his own country in 2017 after he was appointed Kenya’s tourism Ambassador.

It’s from this background that he felt so touched and decided that once his contract with Kenya ended, he would willingly market Uganda’s Tourism and as a destination at no cost. He later handed his best international awards to Uganda National Museum in 2018 to act as an inspiration for the young generation, and increase the numbers of museum visitors.

Eddy Kenzo will join the sector in the pushing forward majorly three Tulambule campaigns,  *Twende Uganda campaign- whose purpose is to increase the awareness amongst the EAC.., *Destination Uganda campaign- which targets the rest of Africa…, and *Pearl of Africa Tourism Campaign whose target is the international scene.