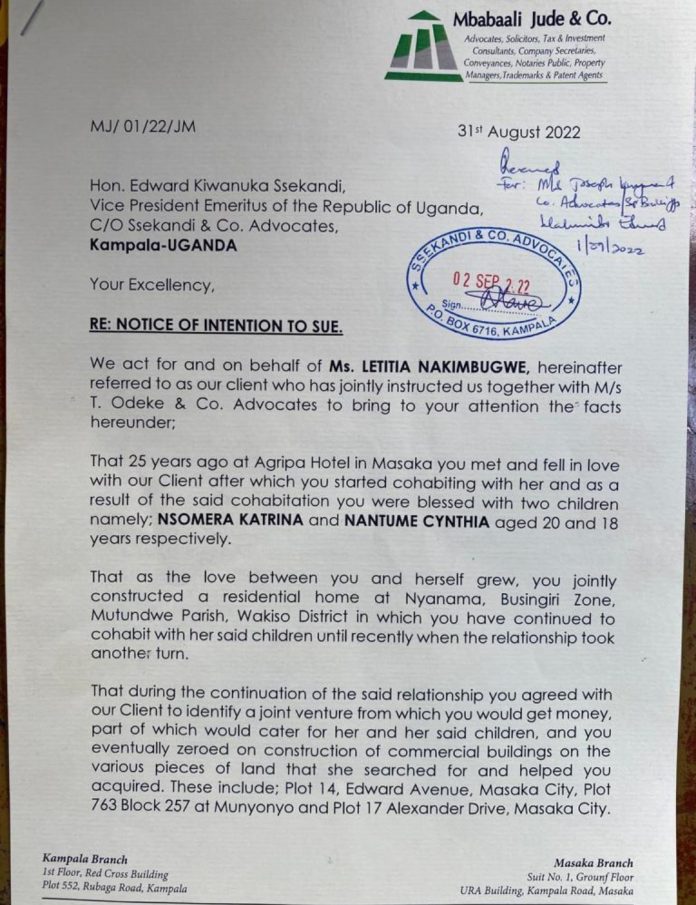 Ex Vice president Edward Ssekandi has been known as a person who keeps a low profile. He is even popular for his saying, “Nze simala gogela” meaning I do not just speak however now is in the spotlight for the wrong reasons.

Edward Ssekandi is threatened to be sued by his side chick, Letitia Nakimbugwe through her lawyer Jude Mbabali for trying to close her out of the home they have aboded for 25 years.

The ex-vice president of Uganda is accused by his second wife of attempting to confiscate property they co-own.

Letitia is requesting Edward to meet and resolve the issue before heading to the courts of law.

In the written document, Nakimbugwe states that the two met at Agrip Hotel in Masaka and eventually fell in love hence having two children.

They even built a house together in Nyanama, Wakiso District where they lived till recently when they broke up.

While they were cohabiting, they decided to purchase land and establish rental apartments as an investment for their children.

The jittered lover indicates that she was perplexed when recently Ssekandi wrote to the tenants informing them that the change in management of the property. His daughter was to take over Victoria Ssekandi from Letitia Nakimbugwe.

Ssekandi further through his law firm requested bailiffs to evict his second baby mama from their abode in Nyanama.

It should be remembered the former speaker of parliament is legally married to Margaret Ssekandi for some good years.