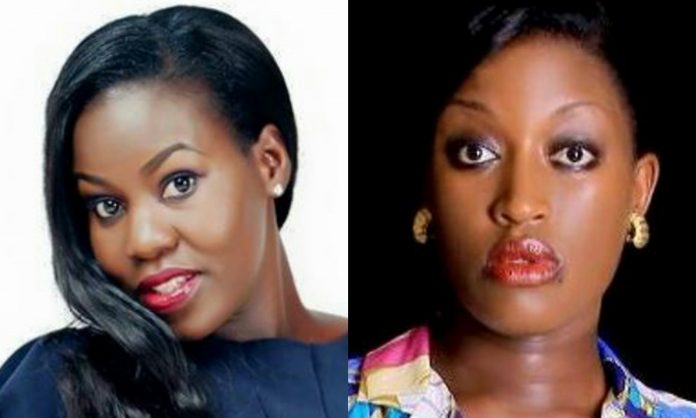 The feud between Justine Nameere and Faridah Nakazibwe has revived as the latter divulged how the former was fooled by her ex-lover Umar Ssali and so many other dirty secrets.

It is to remember that this feud commenced in 2016 when NTV’s presenter – Nakazibwe accused Nameere of using fake Facebook accounts to pass untrue allegations about her relationship with Umar Ssali and they even ended up in court as Nameere was accusing Nakazibwe for defamation.

Out of the blue however, the war between them went mute not until yesterday when Nameere again resuscitated it through a very long facebook post accompanied with two live videos. Through this very post, Nameere divulged all the battles Nakazibwe has been fighting including Flavia Tumusiime and Andrew Kabuula, and how her ex-lover (Umar Ssali) made a fool out of her that he was a doctor yet he was working as a security guard in Qatar.

To know more about Nameere’s revelations she made about Faridah Nakazibwe, take a thoroughly read in her post below.

”So about Faridah Nakazibwe, she recently found out that all the crap she was accusing and attacking me for, were actually a false making of her husband, a one Umalu Ssali who would open fake pages and frame innocent people to coerce Nakazibwe into believing that many ladies were chasing after him and that many people were telling him ill stuff about her so he could use this blackmail to make her believe he is helping her to be with her!

For starters, I refer to him as Umalu Ssali because those are the names Nakazibwe put in her affidavit and Police statements as her husband’s names! It was not just me, but he framed her other workmates, many of her friends and family from different angles – some as vibing him others as telling him cruel stuff about Nakazibwe! Unknown to Nakazibwe, he was making up all this stuff, creating fake pages and sending himself this stuff, to blackmail her and have coercive control over her, but sadly framing innocent people! Creating bad blood that resulted in clashes between Nakazibwe and different people! It got nasty when he started taking screenshots of different information in her phone then he would send it to himself and use pseudo/fake accounts and phone numbers asking her for money or else he leaks the information! Nakazibwe says he would strictly and violently protect his phone from her and not allow her any access to it yet he would access her phone any time! With time he pulled similar stunts on Flavia Tusiime Kabuura who by then had just 3 weeks to her wedding with her now-husband, Mr. Andrew Kabuura! This man opened fake pages and actually got Nakazibwe convinced that Flavia was after him, a girl who was awaiting a wedding day! People are nuts! It is very sad how Nakazibwe believed and started attacking Flavia! Workmates and friends advised Flavia to quickly take legal action because Nakazibwe might attack her publicly like she did to me and cause unfair drama to her life all in the name of pleasing her lunatic! Flavia and her hubby quickly involved their Lawyers and CID! Workmates intervened and parties were brought to table to discuss “this mystery”! As usual Umalu Ssali never showed up for any Police or Lawyers’ meetings! (Just like in all the Police and Court engagements I had with Nakazibwe, he never showed up, despite Nakazibwe promising us every other time that he was to show up and come along “with overwhelming evidence”! We would wait and only hear excuses from Nakazibwe on his behalf! She always looked just sad when everyone apart from herself, could see she was being fooled by this guy!) So basically his job was to frame people, anger Nakazibwe, incite her to attack innocent people, cause drama, then when those people involve authorities, he disappears from the picture as she pulls ropes alone! After the Flavia incident, CIDs, their workmates, Lawyers all cautioned Nakazibwe to wake up and realize she has been fooled for so long! They cautioned her that this man keeps framing innocent people who consequently attacks but they cautioned her that one day they could end up messing with very wrong people! So Nakazibwe started to get suspicious! She says one-day Umalu Ssali forgets to lock his phone and boom she sees all these screens shots coming from her phone to his and then to other phones which numbers she could recognize are the ones that keep blackmailing her for money! After discovering the truth, Nakazibwe says the guy turned shame into anger, he started to threaten her to release her nude pictures and to tell the public her secrets! Nakazibwe told Police about the blackmail she was living under! When he realized, the situation was getting harder for him, he took off and went back to Qatar where he works as a security guard! Never was he a doctor like he had first made Nakazibwe believe and she, in turn, informed the public of how her new husband was a medical doctor!

A few mutual friends intervened and I sent her a message through them and my Lawyers, that I have forgiven her but given her 90 days to tell the public the truth! She did not! I added her more 90 days and she still informed me she is scared of telling the public! She requested that I forgive her privately and withdraw the case but we say nothing to the public! How selfish! She quickly forgot she introduced this to the public! Those who followed that story, vividly remember how different people including former workmates struggled to tell her “Nakazibwe pull down that post and retract your statements, it seems Nameere was framed unless you have proof of everything you are saying!” She insisted she had overwhelming evidence and proof! Yet in Court and at Police she always asked us to wait for Umalu Ssali mbu he is the one with the evidence until she eventually told us “there is no evidence coming, he will not show up, he is actually the culprit and I divorced him and not in touch with him”! This is a matter Nakazibwe herself introduced to the public instead of privately investigating it first! I was abused, tortured, defamed, called all sorts of nasty ill stuff because of her false accusations!

And besides such lunatics like Umalu Ssali need to be exposed, he could be out there framing and blackmailing other people! Not even Court compensation or a million apologies from her can undo the damage! ONLY GOD CAN COMPENSATE ME BUT EITHER WAY, THE TRUTH MUST BE TOLD! Everybody learn this; Face book likes, comments, fooling the public, pretense, living in denial, does not set a person free! Only and only the truth sets a person free! I was very consistent with the truth, it set me free and the reverse happened for those who were telling lies! DO NOT EVER LIE TO YOSELF ABOUT THE TRUTH, IT IS UNSTOPPABLE! LIKE I ALWAYS SAY; MILLIONS OF LIES CANNOT STOP THE TRUTH FROM EXISTING AND EMERGING SOMEDAY!! PLUS KARMA IS A CITIZEN IN EVERY COUNTRY! AND STILL, ONLY THE TRUTH CAN PROTECT YOU FROM KARMA’S MERCILESS CLAWS! For the good people who believed in me right from the day Nakazibwe attacked me in a very unbelievable unforgettable way, with very nasty grave material falsehoods and you still chose to hear me out and you insisted “Justine Nameere did not do that and cannot do that!” I thank you, I do not take it for granted! God bless you! I hope everyone picks lessons from this because they are many! Finally Madam Faridah Nakazibwe, yes I empathize with you that you were gullible enough to be fooled a simple crook who got you into unnecessary clashes with different people BUT sadly life expects you to take responsibility for your actions! Plus take time and be true to yourself! Look into yourself as well! Someone like you who struggles to be such an angle and so perfect should not be counting divorce number 4!

You believed I and all the people you attacked were not important, their feelings and lives did not matter to you! Like I said right from the start, I do not know Umalu Ssali, I have never spoken to him or seen him! I thought he would show up in Court or Police whenever they would summon him but he never did, you always showed up alone with his pictures which the Police and Lawyers put on file! I cannot forget to thank God for revealing the truth!

Going forward, Nakazibwe learn to think and rethink and even overthink before you accuse anyone of anything! If you do not have 100% proof, do not attempt to allege anything or accuse anyone! Authorities suspect Umalu Ssali kept fooling you and you attacking people because you both did not think people would stand up to you and take it as far as Police and Courts of Law! I hope from this perfect example of a karma experience, you learn to be more careful!” posted Justine Nameere.