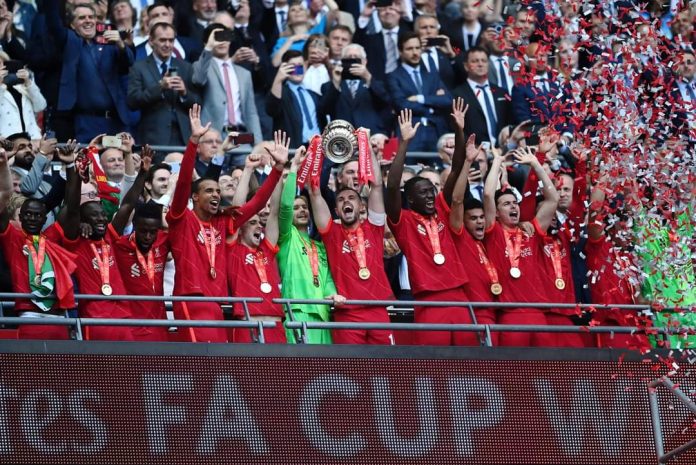 Liverpool beat Chelsea to win the FA Cup in a much-contested encounter yesterday.

The match ended all square in the 90 minutes as both teams missed golden opportunities. The English giants pushed the game to extra time and they still fired blanks, only for the game to be settled in the penalty shootouts.

Liverpool came close to breaking the deadlock in both the normal 90 minutes and the extra time. In the 70 minutes, Arnold Alexandra Trent crossed the ball into the box which found Robertson only to hit his lap and hand to find itself out while trying to work his feet.

Liverpool’s left-back still squandered another chance as he met James Milner’s lushing ball at the back end. He managed to hit on a volley but it kissed the side of the post and went out.

Chelsea also came close when Pulisic and Marco Alonso both tried to drive the ball low to get passed Alison Becker, Liverpool’s number one but both takes went wide.

The game ended 0-0 as the two German tacticians Tuchel and Klopp failed to outwit each other.

Both teams scored the first two penalties but Cèsar Azipilicueta, the Chelsea captain missed the second. The next takers on both sides immaculately scored theirs until Saido Manè failed to convert the last penalty in the first five shootouts to bury the tie. Mendy saved his national team compatriot’s spot-kick to give his team hope.

On the 7th spot-kick of Chelsea, Alisson Becker stood firm and parried away Mount Mason’s reachable shot. It was Liverpool’s time to end the tie and Konstatinos Tsimikas held his nerve and sent Mendy the wrong way to win his team their 7th FA Cup title.

This was the second time in the season Liverpool edged Chelsea in a cup, the first was the Carabao cup which the Kops also won in penalties.

The Merseyside side’s FA triumph means that their quadruple aspirations are still alive. They are 3 points behind Man City in the English Premier with two games left to play and they will meet 13 UEFA Champions League holders, Real Madrid in the Final in Paris at the end of this month.

By Andrew M. Mwenda A local musician known as Sheeba Kalungi went on YouTube with...
News

By Andrew M. Mwenda A local musician known as Sheeba Kalungi went on YouTube with...
TodayNews