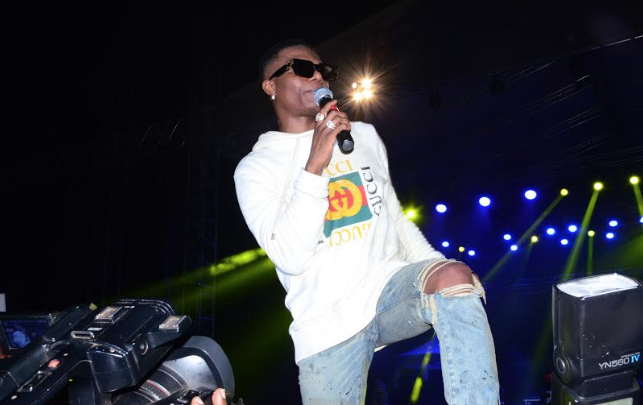 Nigerian Singer Wizkid has put up an electrifying performance in Kampala!  Though his show was not really advertised he proved his greatness by filling up the Kololo Airstrip Independence Grounds, one of the largest space for events.

Though the event was anticipated to flop because of the poor advertisements, by Thursday, the event tickets were actually sold out. This is the third time Wizkid has held a concert in Uganda and he has proved that he is the biggest Nigerian artist loved by Ugandans.

The event was graced by a few selected Ugandan artists who sang to the crowd. These were John Blaq, Vinka, Weasel Manizel, and Fik Fameica.

Wizkid hit the stage at almost a half past 11pm nd started  his performance with his song ‘sweet love’ before he went on to sing ‘fever’ that led the crowd wild. The fans reported that this concert was one of a kind and this is the best of all his concerts he has held in the country.

During his performance, Wiz Kid spared two minutes of silence in commemoration of his fallen Ugandan friend, Mowzey Radio. Together with Weasel (longtime singing partner of late Mowzey Radio) they performed the hit song ‘don’t cry’ which he did together with the duo.

He recognized the Radio and Weasel duo as African legends, one of the best musicians that Ugandans has ever had.

During the thrilling performance, Wiz Kid also invited Big Trill the popular artist behind the ‘Parte after Parte’ anthem. They performed the song together and sent the crowd wild! He summed up the show with his mega hit songs in Uganda ‘Socco’ and ‘Joro’ is latest bang!