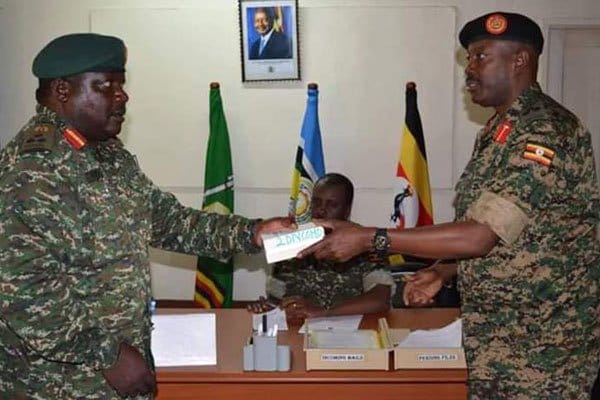 .Brigedier Francis Takirwa has taken over the command of the Mbarara based UPDF’s 2nd Division.

Brig Kayanja Muhanga handed over to him on Thursday in a ceremony presided over by the CDF Gen. David Muhoozi.

Gen. Muhoozi hailed Brig Muhanga for his selfless service to the nation and called on Brig Takirwa to excel.

The CDF observed that 2nd Division is one of the largest and most productive Divisions in the country and therefore, requires to be handled with the utmost care, said a statement released by the UPDF spokesperson Brig Richard Karemire said.

He noted that the Commander in Chief had a lot of hopes in the new commander as he takes over the mantle from Brig Kayanja since Brig Takirwa is also a very experienced field Commander.

Prior to his deployment as second infantry Division Commander, Brig Takirwa has been the Chief of Education, Sports, and Culture in the UPDF and is also UPDF representative in Parliament.