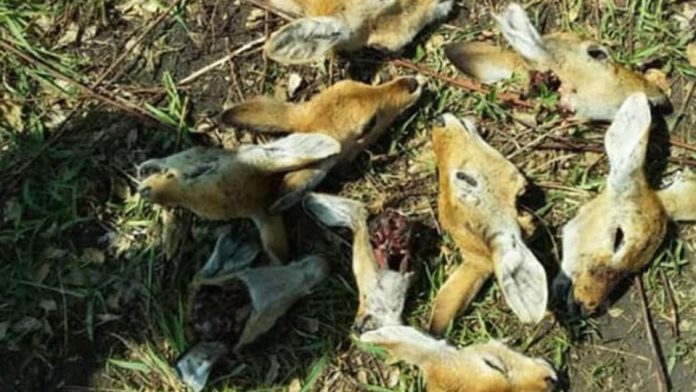 At an event on 7 February, British High Commissioner HE Alison Blackburne, and Executive Director of the Uganda Wildlife Authority (UWA) Dr Andrew Seguya, spoke to the Ugandan media about the fight against the illegal wildlife trade (IWT). The High Commissioner and UWA Director inspected illegal ivory and other confiscated illegal items at the UWA offices, including valuable leopard and snake skins. Together with Patrick Shah, Director of the Uganda Conservation Foundation, they spoke of the challenges facing those fighting IWT, and looked forward to the London Conference on the Illegal Wildlife Trade, which will be hosted by the UK government from 12 to 13 February 2014.

The British High Commission issued the following press release at the event:

The Illegal Wildlife Trade (IWT) is so much more than ‘just’ an environmental issue threatening biodiversity and ecosystems. It drives corruption and insecurity and undermines efforts to cut poverty and develop sustainably. IWT is a serious criminal industry worth billions every year. According to the UN Office on Drugs and Crime annual proceeds from the illegal wildlife trade averaged between US$7.8bn – US$10bn in the years 2000 to 2009.There is also a risk that insurgent or terrorist groups could benefit from the trade. Therefore tackling it would build growth whilst enhancing the rule of law, stability and good governance.

IWT products used to be available to only the wealthy few, but economic growth has led to huge expansion of the middle and upper class with high spending power. IWT has flourished with the expansion of the internet as a global marketplace, bypassing national and international regulations. Illegal ivory trade activity worldwide has more than doubled since 2007, with ivory fetching up to US$2,000 per kilo at end point of sale and elephant numbers in all four African sub-regions are now in decline. Organised crime groups, especially those with smuggling capabilities, find wildlife trafficking attractive because of its low risks, high profits, and weak penalties.

IWT is a truly global issue which cannot be ignored. To solve it, we need to reduce and remove demand for products, prevent transit and help range states, such as Uganda, to choke off supply. This requires international political commitment from the highest levels of government. The UK is determined to play its part in a global effort – getting agreement at the G8 and in the Commonwealth to work with partners across the international community to tackle the growing problem of IWT. The British Government recently announced it would be providing £10m to combat the illegal wildlife trade. The British High Commission in Kampala is also playing its part by providing geo-location cameras and solar panels for new anti-poaching ranger stations to be established in the Murchison Fall Conservation Area. We are delighted to support the excellent work of the UWA and the Ugandan Conservation Federation in this way. In addition, the UK is also, through the Darwin Initiative, considering support to anti-poaching projects and sustainable development initiatives with local communities in Uganda.

Some progress has been made. In May 2013, the UN officially characterised international wildlife and timber trafficking as a “Serious Crime”, which means a minimum sentence of four years. The EU Wildlife Trade Regulations implement the provisions of CITES. In July this year, the EU and China, considered the biggest consumer of IWT products, signed a landmark agreement to join forces to help combat the illegal trade in wildlife products. The EU/China agreement aims to forge stronger ties against wildlife trafficking between the two regions through the exchange of information and enforcement, particularly illegal products traded from Africa to China via Europe. In addition, at the last Commonwealth Heads of Government meeting in Sri Lanka in November 2013, the Communiqué included strong language on IWT for the first time. So good work is already being undertaken but much more needs to be done.

Some of the traps used by poachers to hunt game
The London Conference on 12-13 February aims to tackle three interlinked aspects of the Illegal Wildlife Trade:
• improving law enforcement and the role of the criminal justice system;
• reducing demand for wildlife products;
• supporting the development of sustainable livelihoods for communities affected by IWT.

The London Conference will be opened by the British Prime Minister and HRH The Prince of Wales thus underlining the importance the UK places on this issue. The London Conference will not duplicate the initiatives already underway to tackle IWT but rather it will build on them, ensuring that they have the necessary high level endorsement and are as well-coordinated and resourced as possible.

The London Conference will focus primarily on elephants, rhinos and tigers. These three iconic species are the primary targets of organised criminal activity and are facing unprecedented levels of poaching. We have already seen the extinction of the Western Black Rhino last year, which is a tragedy. We must work together to ensure it is the last extinction amongst these great animals. The problem is not insoluble. The solutions are there but only if we join forces and ensure a system that works. From improved law enforcement to working with local communities there is plenty to do, and we are keen to get started.