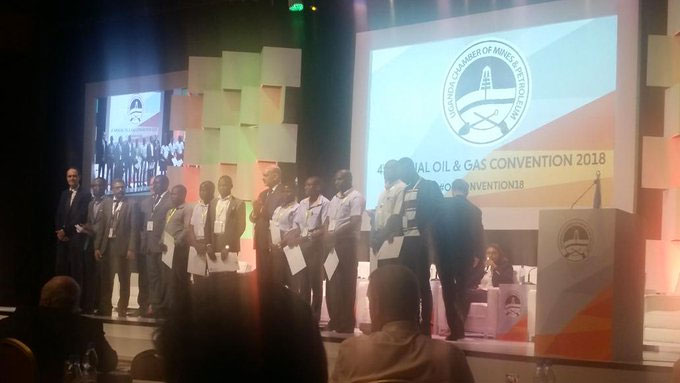 A batch of 22 internationally certified welders for the oil and gas sector have been passed out.

The 22 trained as trainers of trainees, were unveiled Thursday on the second day of the 4th Oil and Gas Convention in Kampala.

The group underwent a one-year training programme run by Chicago Bridge and Iron Inc. a large American engineering, procurement and construction company that specialises in projects for oil and gas companies. The training was supported by GIZ, a German development organisation operating in Uganda.

A consulting firm Q-Sourcing sourced the 22 welders who were taken from various welding workshops in the country and then subjected to rigorous training, both in Hoima, the epicentre of oil and gas activities, and at Uganda Petroleum Institute Kigumba, by The Assessment of Skills Centre (TASC).

The welders were then subjected to an independent verification of their welding knowledge and skills through an internationally recognised test administered by the Egyptian Welding Agency in conjunction with the American Welding Society, who flew in certification experts.The welders were also subjected to another independent certification test by Veritas, and international certification firm now operational in Uganda. While unveiling the certified welders, Mike Cleaver, the vice president of Chicago Bridge and Iron, said the 22 welders are some of the very best welders in East Africa and the continent.

Cleaver said the objective is for the trainers of trainees to transfer their knowledge and skills to other welders. One of the welders, Milton Kisolo, told URN that the welding training experience was, “totally different because it was much more than the welding we know here in Uganda.”

“We really thought we were welders, but when you reach there; you realise things are totally different compared to what they call international standard levels. We did what they call coded welding which we did not know about. [It] is about welding pipes and tanks specifically for oil and gas…the welding is totally different from what people know out here. Until you’re in, you can’t know what it takes.” said Kisolo.

Kisolo said welding, as a profession, is too deep and wide and involves many layers which many ordinary welders in Uganda do not know about. According to Kisolo, the government needs to invest in and promote welding as an important element of industrialisation.

Asked what he intends to do with the newfound knowledge and skills, Kisolo said he wants to undergo more skilling so that he increases his chances of benefiting from the oil and gas sector, including the possibility of starting his own welding firm.

Lack of certified welders had become the mantra whenever there is talk about Ugandans lacking requisite skills for the oil and gas sector.