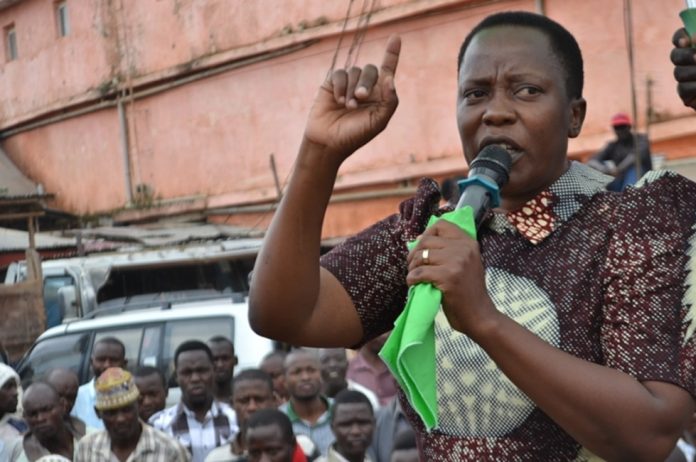 Members of the opposition in parliament who are on a national tour opposing change in the Uganda constitution have accused religious leaders of being traitorous.

Addressing masses in Mukono town on Saturday, head by Mukono municipality MP Betty Nambooze said, it is time religious leaders be acted upon for being traitors to their country.

Nambooze said, it’s so sad those religious leaders that are supposed to live by the truth to be used by President Museveni for personal political gains because of the cars he always offers them.

Nambooze speaking from Mukono taxi pack said its time for people to fight against such religious leaders if the concerned religious councils don’t handle them.

Nansana municipality MP Wakayima Musoke argued the youth to join the few opposition members of parliament in the straggle to defend the constitution and educated them about the importance of land, as it is the only wealth they have left and have to defend it for the future generations.

Butambala MP Muwanga Kivumbi, challenged the people  that they always show to much love and support to Buganda kingdom but when it comes to such constitutional matters people just hide, he said if the land is taken the kingdom shall be no more.

Democratic Party veteran Kiwanuka Mbuga, assured people that back in their days one was baptized when she or he was old enough to speak for themselves and even read the bible, which was the same case with President Museveni.

Kivumbi also asked residents to mark homes of members of Parliament who reside in the district with an aim of forcing them from not passing the land amendment bill.

He said that the only way to put their members of parliament on pressure is by marking with sign post homes of every Member of Parliament who has a home in this district.

He revealed that only Mukono district there are 16 members of parliament who stay in it including the five members who represent them in National assembly.

Kivumbi asked the gathering always to visit their homes and demand them not to pass the land bill into law which is before parliament.

He asked the Inter religious council of Uganda to apologize to Ugandans for the practice of Ankole Bishop Sheldom Mwesigwa at St Luke church of Uganda Kinoni Mbarara.