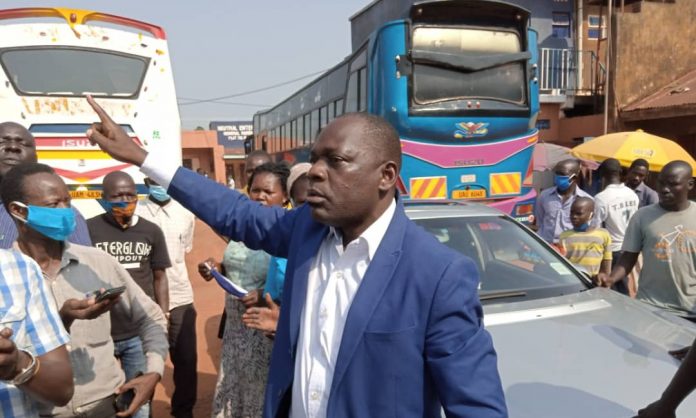 Hundreds of passengers and several drivers are stranded in Gulu district due to the Covid-19 lockdown. This is due to that the President Directives to lockdown Gulu did not understand public

Gulu district coronavirus taskforce headed by Major Santos Okot Lapolo, the Gulu Resident District Commissioner on Wednesday morning blocked buses and taxis from exiting the district citing that the district was under lockdown.

However, Gate Way Bus registration number UAY 397 D which left Gulu for Mbale district via Soroti at 7:00 a.m shift was stopped by traffic officers at Layibi Round About bordering Gulu and Omoro districts.

Abdul Kawuta, the bus driver said that he was forced to return to the main bus park and offload the 28 passengers who were already on board.

The conductor was also forced to refund each passenger the 50,000 shillings fare that they had paid for the travel.

Kawuta explained that they were not informed early enough that Gulu district was under lockdown, he has appealed to the Gulu district Covid-19 taskforce to allow him and three other staff to return to Mbale even on an empty bus.

David Mugerwa, a passenger destined to Kyankwanzi district through Kampala was also left stranded at the park after he was informed that busses were not travelling because of the lockdown.

Jennifer Ajok, was equally left stranded with her five months old baby after setting off from Palaro Sub County over 10 kilometers away from Gulu Main Bus Park to travel to Karuma in Masindi district only to discover that transport has been suspended indefinitely.

Norbert Oyat, the Kitgum Stage Deputy Master said that 25 taxis that were destined to Kitgum and Pader districts were also blocked by the security from travelling.

He disclosed that eleven other vehicles returning to Gulu district today morning were also intercepted and stopped at Lacek Ocot in Pader district.

At Lamogi Ber Bus Terminal seven buses were equally blocked from travelling. They include Gaaga, Larem, Home Land, Opit, Zawadi and Makome Bus Companies among others.

Joseph Odoch, the Manager Larem Bus Company expressed dissatisfaction arguing that they were not informed about the lockdown on time hence leaving hundreds of strangers and several bus operators stranded today

However, Gulu Resident District Commissioner Major Santos Okot Lapolo argues that Gulu is among the eight districts that have been locked down by President Yoweri Museveni on Monday for being high risks districts to Covid-19.

But Gilbert Olanya, the Acholi Parliamentary Group General Secretary has protested the closure noting that Gulu has only registered two community cases of Covid-19 which does not call for the lockdown.

By the time of filing this story, heavily armed security personnel of the Uganda People`s Defense Force and Police were patrolling the bus parks.a1