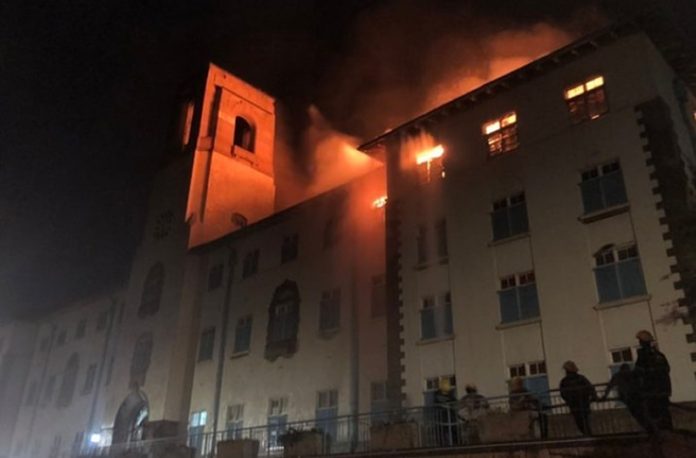 It is a very dark morning for Makerere University! The county has woken to the bad news of the fires burning the Ivory Tower also known as the Main Building of the East and Central Africa’s leading university. The Main Administration Building is 79 years old, having been completed in 1941. It is an iconic building and is the symbol of higher education in Uganda and the entire East and Central African Region.

According to the local briefing, the building caught fire in the wee hours of the night under unclear circumstances. The Uganda Police Fire Brigade have been at the scene to put out the fire and a witnesses intimated that almost half of the roof was affected.

Prof Barnabas Nawangwe has confirmed that the destruction is unbelievable but he has vowed to restore the Makerere University main building to its historic state following a fire which ravaged the building this morning at around 1am.

He added on that Makerere University was already preparing for its centenary celebrations slated for January 2022. He said that although the burning of the iconic building is a setback, the building will be reconstructed before the big day.

However ‪the Fire Brigade finally managed to put out the fire that razed Ivory Tower at around 4:00 am., but after the entire roof of the building had collapsed. The entire top floor of the building and the entire Finance Department had been burnt.

It has been reported that the fire engines experienced a challenge with lack of a fire hydrant within and in the vicinity of the University. The Fire Brigade had to fetch water from the hydrants at the Fire Brigade Headquarters.

When it appeared to the Fire Brigade that the fire had been completely extinguished, despite smoke still coming off from the Central Registry, they left the site. Unfortunately, fire again broke out in the Council Room at 8:00 pm but the Fire Brigade arrived within 15 minutes and put out the fire within one hour. The Fire Brigade has been on standby on site, fighting small fires throughout the night.

Investigations into the Cause of the Fires

The Director of the Criminal Investigations Unit has camped at the university to establish the cause of the fires that is still unknown. She said that “the Uganda Police inquiries have commenced and we are going to investigate and find out what happened, whether it is an arson or any other cause. At the moment, it is still early to say what has caused the fire”.

In a related development it has been established that two officers have been arrested on reasons of neglecting their duties to protect the University. Those arrested are; a police officer – one who should have been on duty at the entrance of the Main Building which caught fire just after midnight – and a private security personell from the University’s internal security. The third officer was still at large by Sunday evening according to Ms Akullo.

An early development show that the Main Building is guarded by the University’s security services and the Uganda Police. At the time of the fire outbreak, the officers on duty were inside the building near the entrance and they apparently did not notice the problem until they were alerted by the Chief Security Officer.

The Fate of Documents

Practically all the documents in the Directorates of Finance, Human Resource, including the Central Registry, and the Directorate of Internal Audit were destroyed. Fortunately, all hard copies of the financial documents for previous financial years had been moved to the archives, which was not affected by the fire. Similarly all old files in the Central Registry had been moved to the archives. Information of the staff in service has been digitalized and is safely kept on servers, which are not in the Main Building.

The financial documents for the Financial Year 2019/2020 are currently being audited by the Auditor General and were safely evacuated from the Main Building. With the move to the Integrated Finance Management System (IFMS) all financial transactions of the University are automatically backed up electronically at the Ministry of Finance, Planning and Economic Development.

In addition, with the recent financial decentralization at the University, a considerable percentage of the financial documents are kept in the Colleges and administrative Units.

All revenue collection including student fees, rent and other payments are received directly by URA, which then transfers the money to the consolidated fund. All payments are similarly made through the IFMS. Management therefore does not keep cash in offices as alleged by some social media reports and there was no loss of cash in the fire.

Documents from the offices of the Vice Chancellor, the Deputy Vice Chancellor (F&A) and some of the documents in the Office of the University Secretary which were not razed in the fire were also evacuated.

The University Management is compiling the value of all property lost in the fire, based on the University Inventory and Board of Survey report, which was concluded at the end of August 2020.