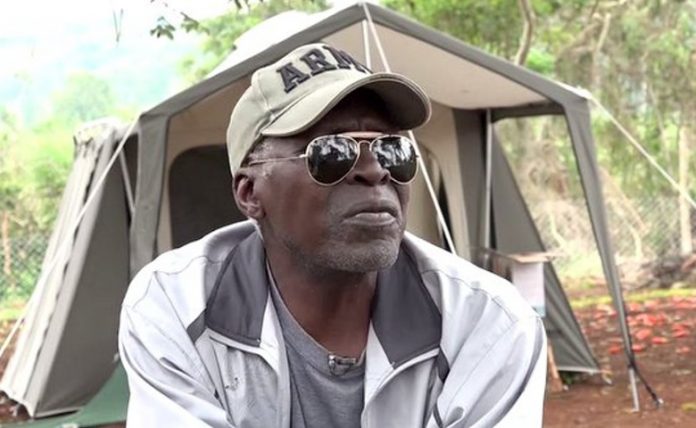 Maj. Gen. (Rtd) Kasirye Gwanga is dead. According to family sources, Gwanga has breathed his last at Nakasero Hospital this morning. The nonsense soldier was admitted a few weeks ago with a life threatening ailment.

Last month, Kasirye Gwanga was been admitted to the UPDF Senior Officers Diagnostic Centre based in Mbuya. Later he was transferred to Nakasero Hospital where he has breathed his last.

The major general last had a public appearance in Mityana in March where he and his soldiers enforced the president directives against Covid-19.

WHO WAS MAJ GEN KASIRYE GGWANGA?
Gwanga was born in 1952,in Mubende District, to a father who was a hunter and farmer. Kasirye Ggwanga learned both skills and is still good at both. He attended Katakala Primary School, then he studied at Kibuli Secondary School for his O-Level education. After finishing Senior 4, he joined the Uganda Army in 1972.

Following boot camp and initial training, kasirye Gwanga was posted to Arua in the West Nile sub-region, as a map reader, serving in that capacity until 1977. In 1978, he was promoted to the position of artillery officer.

In 1978, the Tanzania People’s Defence Force (TPDF) invaded Uganda. In 1979 they captured Kampala and deposed Idi Amin. Kasirye Ggwanga surrendered and was taken to Tanga, Tanzania, as a prisoner of war number 17341.

In June 1980, president Godfrey Binaisa negotiated the return of the political prisoners to Uganda. They were first housed at Maluku Prison in Mbale District. Later, they were moved to Kirinya Prison, Jinja District. On 7 October 1981, Kasirye Ggwanga was in the first batch to be released.

Three months after Kasirye Ggwanga’s release, the Uganda Freedom Army (UFA) rebels led by Andrew Kayiira attacked the army barracks at Mengo Lubiri in Kampala. The government in power at the time, led by Milton Obote of the Uganda People’s Congress (UPC) mistakenly thought that the recently released prisoners (former Idi Amin soldiers) were involved in the attack. Kasirye Ggwanga was placed on the “wanted list”. He went underground. His elder brother, Lieutenant James Kasirye, a military pilot then based at Nakasongola Military Air Base was arrested and tortured, then killed when he refused to identify where his brother Kasirye Gwanga was hiding.

To avenge the killing of his brother, Kasirye Ggwanga joined the UFA rebels, then about 650 in number. This group operated in the Mawokota and Mubende areas in Buganda. In 1985, he left UFA and joined Yoweri Museveni’s National Resistance Army, which captured Kampala, Kasirye Ggwanga commanded a 120mm artillery unit.

Between 1986 and 2005, he served in several roles including as the LC5 chairman for Mubende District and as the director of stores in the UPDF. On 31 January 2005, he was retired from the UPDF at the rank of brigadier. However, after three months on the outside he came back to the military and asked to be re-instated. The UPDF commander-in-chief allowed him to rejoin on a renewable contract of five years.