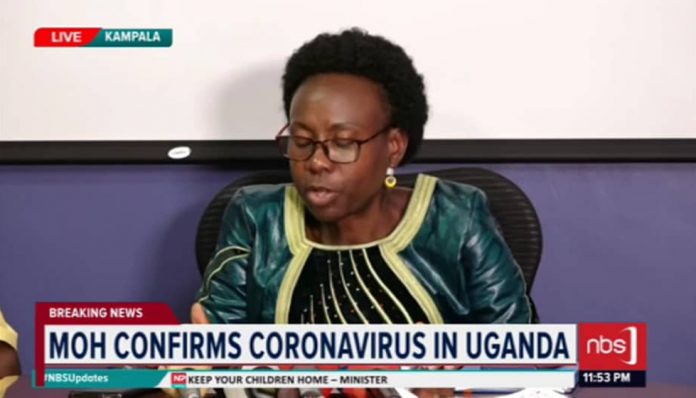 The news we are breaking is not good for Ugandans! The Ministry of Health of Uganda has confirmed her 1st case of Coronavirus Disease (COVID-19).

The confirmed case is a 36 year old Ugandan male who arrived from Dubai today, Saturday 21st March 2020 aboard Ethiopian Airlines at 2:00am. Dr. Ruth Aceng has confirmed this at a press conference that has been held at midnight. She has reported that the victim was identified during the screening process at the airport when his temperature was 38.7. The high temperatures prompted the health teams to isolate him at the airport for further follow up. Subsequent temperatures were later taken at intervals of 30 minutes and one hour remained the same. He was evacuated to Entebbe Grade B Hospital for further follow up where a nasal swab was taken for analysis.

The confirmed case presented with high fever and poor appetite. He is not coughing neither did he have flu. However, the persistent fever prompted the health workers to isolate him.
The medical personnel took samples of his nasal swab which were sent to the Uganda Virus Research Institute (UVRI) for analysis.

Results from UVRI showed the sample is positive for COVID-19.
It has established that the confirmed case had traveled to Dubai on the 17th of March, 2020 (four days ago) for business purposes. At the time of his travel, he was in good health. He is a resident of Kibuli, Kagungulu zone, Kampala. Currently he is being monitored and attended to at Entebbe Grade B Hospital.

At the press briefing, it was also revealed that to date a total of 1,827 travelers including Ugandans and others traveling back home have been identified as coming from high-risk countries for purposes of follow up. About 827 are completing self-quarantine while about 1,000 are under quarantine.

The Ministry of Health has gone ahead to reassure the general public to remain calm since all measures were undertaken to identify this case at the airport and isolate him in a timely manner. The passenger manifest has been retrieved and all contacts are known as we are in position of the passports of all the travelers that came on that plane.