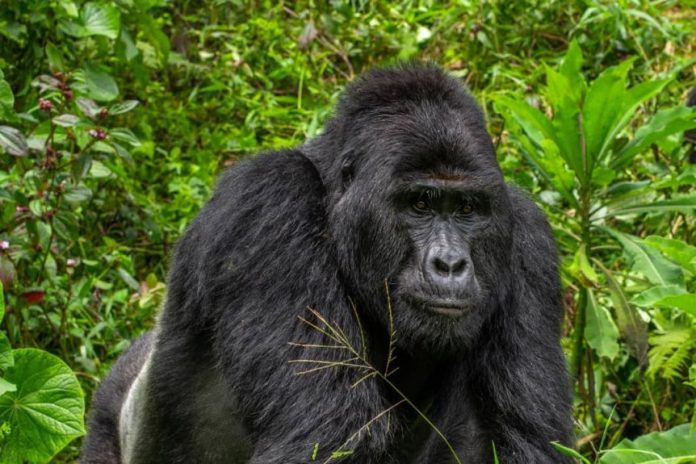 Four men have been arrested over killing of a silver back gorilla in Bwindi Impenetrable national park. In a statement released on Twitter by the Uganda Wildlife Authority, the alleged four men killed Rafiki, a well known mountain gorilla of approximately 25 years.

According to the UWA report, the silverback known as Rafiki was killed by a poacher using a sharp object possibly a spear that penetrated his internal organs after entering through his abdomen.

Rafiki has been popular among tourists going on gorilla tours for decades and is believed to have lived for 25 years. He was the leader of Nkuringo gorilla family, a habituated family of 12 individuals in the Southern Part of Bwindi Impenetrable National Park. Rafiki who went missing on 1 June and the body was discovered the next day.

The death of Rafiki shocked the tourism fraternity for losing famous beringei beringei the leader of Nkuringo gorilla family who was friendly to humans.

The four poachers who have been arrested for killing of a rare silverback gorilla are Byamukama Felix, Bampabenda Evarist, Museveni Valence and Mubangizi Yonasi.

Despite the fact that tourism has been affected by Condi-19 Outbreak, it has been confirmed by the organization that poaching has increased in recent months where national parks have been on suspension.

UWA the government body in charge of conservation of Uganda’s wildlife reported that the post-mortem report showed that a sharp device or object had penetrated his abdomen and pierced his internal organs. The report was done by the Gorilla Doctors and the Uganda Wildlife Authority.

The Authority arrested the poachers and one of them Byamukama Felix confessed of killing the gorilla in self-defense. He claimed the gorilla had charged at him while he and a colleague were hunting. Felix not only defended himself but also pointed out his colleagues whom he had in the forest that is Bampabenda Evarist.

Mr. Felix lives in Murole village in western part of Uganda and was found with several hunting devices, including a spear, rope snares, wire snares and a hunting bell for a dog collar with bush pig meat.

The authority reported that Felix mentioned Museveni Valence and Mubangizi Yonasi whom they were sharing bush pig with and were arrested on June 7th 2020.

Spokesperson of UWA said that these four men were imprisoned for being found in possession of wildlife specimens, illegal entry into a protected area and killing an endangered species, which carries a maximum sentence of life imprisonment. The last time a mountain gorilla died at the hands of humans was in 2011.

What are other more challenges that mountain gorillas face apart from poaching?