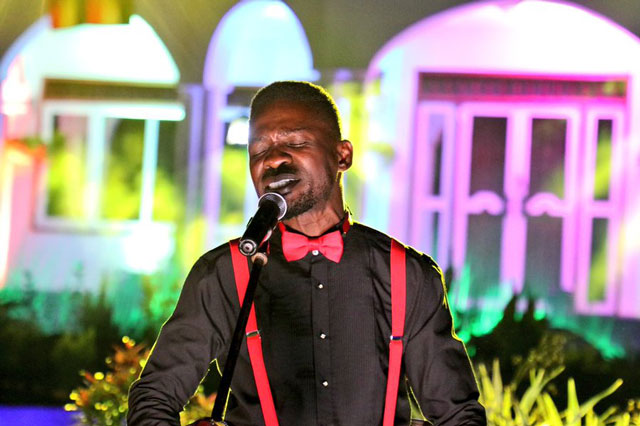 Singer-cum-politician, Bobi Wine real names Robert Kyagulanyi Ssentamu had an electrifying performance in an online concert he dubbed ”Ensasagge Mu Nyumba”. In a live online concert that lasted over 2 hours on Sunday night, the self-styled ‘Ghetto President’ garnered almost 29k live viewers on the video that was broadcasted live on his Facebook page.

In getting such a huge viewership, the aforementioned viewers, he set a new record as no Ugandan musician has got such a huge audience on social media live shows.

Fans started flocking the singer’s page before even his arrival and by the time he walked from his mansion, a plethora of fans was eagerly waiting.

Along with his popular co-partner in music, Nubian Li born Buke Ali, they launched into the show with a reggae session and their two songs aimed at corona virus (Covid-19) sensitization. Besides a couple of glitches in the internet in the course of Bobi’s live concert, his fans stayed loyal and viewers were just increasing exponentially regardless.

The Fire Base proprietor performed most of his songs live with the Solid Band mingling percussion and the modern instruments so well. Besides performing his songs, the singer also took some time to pay homage to some of Uganda’s fallen music greats like Mowzey Radio (RIP) and Herman Basude through redoing their songs, and it was all lovely and amazing.

The setting of the concert was just world-class; from song selection, sound, organization, to lighting, all were so superb and eye-catching! Immediately after his breathtaking live concert, through his socials, he thanked all his fans for the amazing support they showed to him and he jokingly told them that they will have to pay for his next live show.

‘‘Thank you very much for the love ladies and gentlemen. Your online attendance was amazing (naye olulala mujja kusasula 😂).
We apologize for the glitches in our internet but we promise you an uninterrupted version of the show on my YouTube channel by tomorrow”, twitted Bobi Wine.

BELOW IS THE FULL SHOW IN CASE YOU MISSED IT:

‘I Take My Hat Off For You’ – Juliana Eulogizes Bobi Wine