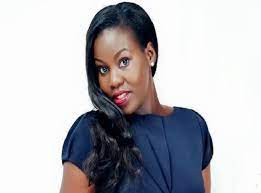 Faridah Nakazibwe has kept the public in limbo about her relationship with Singer Bruno K ever since rumors broke out that the two had a fling.

Eventually, the Mwasuze Mutya host talked about the alleged relationship while appearing on the chatroom show on NBS hosted by Karitas Karisimbi.

Faridah said that they are all lies about her and Bruno K being in a relationship. This is what she said in their candid talk with Karitas, ” my dresser normally brings me clothes at my workplace, one morning she called to come and check out some outfits in her car”.

“She asked me to say something of what had been written about me in some tabloids. I am like what more do they have to say about me, they have always written silly stories and have come to pass.  That’s another one that will fade away.”

“I looked at the outfit and liked it but when I was about to go, she insisted on showing me the story. So, I looked at the headline and quickly went through it. It did not hold any water. I restated to her that it will come to pass.”

The NTV news anchor further explained that she did not even know Bruno K at that time. She went back to her workplace and told her producer about it who also confirmed that he had read the fake story.

She channeled her mind to her busy schedule until she went home. While home, she decided to thoroughly go through the story. She gathered interest in knowing Bruno K. The mother of twins researched about him and actually found out that she loved one of his songs “Bisanyi”. In the middle of everything, she broke down due to the recollection of the past bad stories written about her and her then situation of nursing a broken heart.

Faridah further said,” at that time I was going through a lot of things, I was lonely my kids were at school and maid away. I was going through a hard time since my relationship had just ended. So this Bruno thing triggered me into crying. I kept on thinking why do people want to bring me down? But I had to pick myself up”.

“A few days while I was watching TV, Bruno K was asked about the rumor. He was also surprised and unpleased about it. He said that he was not dating me and why would they tarnish a married woman’s name. He respected me so much.  Actually, at that time he did not know that I had broken up with my man. You know what Karistas, no one knew that my relationship was over for a year. I kept it a secret”.

After watching Bruno’s interview, Farida decided to bring Bruno K on her Mwasuze Mutya Show. her producer contacted the singer and arranged the show.

“The Masaka-born revealed,” Bruno was scared to meet me but he saw this as an opportunity of pushing his brand because my show is big. He told me he was at the station by early morning”.

“I actually bypassed him at the reception while I got into the workplace but I did not even greet nor look at him. That scared him but I did not see him since I was rushing to catch the show”.

“So we got on set, and he said his story like how other people do it on my show. He told me about his rocky relationship with his baby mama and I was also going through the same thing and that’s how we connected and became friends”.

“A few days after the show, he calls my producer since he didn’t have my number to inform him about his intention of making a song about me. The producer told me and he also asked me if he would give my number to the singer which I was okay with. Bruno K called, told me about his project, and gave him a go-ahead”.

“In a short while, the song was out and I actually liked it and he told me that he was planning to do a video”.

“When I got home, I told my daughters about the song and they were so elated and excited. They cheered me up. You know my kids are my greatest strength. They make my day even if I have had a bad one at work”.

“So, in lockdown, we were all home with my kids. We wanted to do something to cheer us up. My daughters suggested calling Bruno to sing for us “Faridah”. I called him and accepted the proposal. He came through, performed the song, and connected with my daughter since they also love music. He taught them how to play guitar, and became friends.”

“After some time, Bruno called me and told me that her baby mama had brought their daughter to him and did not know what to do. I offered to help him with her. The baby came and brought joy to our house, my daughter liked her so much until the time came when she had to be taken away by her mother.  We were so sad because she made our home lively. My daughters started demanding me a sibling. I promised them one when the right time comes.”

“Unfortunately a few months later, Briella’s mother passed away. Bruno K had to take care of her. I called Bruno and asked him to bring her home to start staying with us. Here we are now.”

“The rumors about us dating were wrong, maybe my name and face are so popular. people write about me to get likes and comments on their blogs. Anyway, they are making ends meet.”

In her all-tell-it interview, she talked about her feud with Justine Nameere and how it ended. she is happy Justine got busy and stopped bothering her. She also talked about having another child in the near future but she will keep it a secret as Juliana Kanyomozi did.

Dubbed the pearl of Africa - Uganda, like the name suggests is a prime...
Crimes

Police forensic experts have linked fingerprints of the famous also called Sipapa to other...

Dubbed the pearl of Africa - Uganda, like the name suggests is a prime...
The Uganda Today