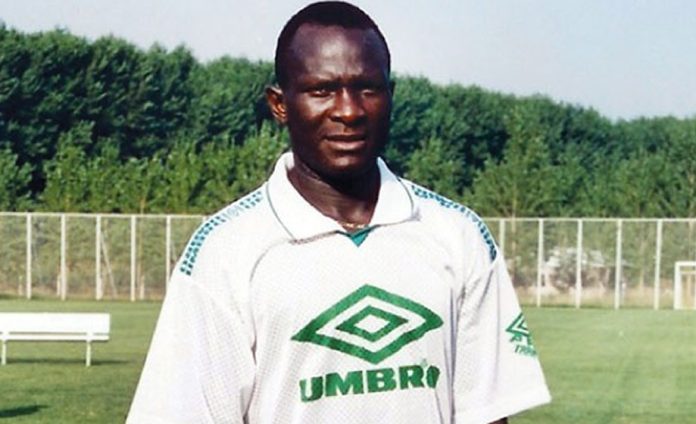 From a peasantry life to one of nobility is the best way one can explain the career of Uganda’s ever best prolific goal poacher Magic Tyson Magid Musisi Mukiibi. A man who stated his career in the slums of Mulago, a Kampala suburb, found him self in one of the world’s most elegant cities of Paris, France and Istanbul, Turkey.

Like most kids in Uganda, Musisi used to kick banana fiber balls during his child hood, according to his mother Nakabugo.

“He could do all his work very early in the morning to get time to play his ball. He liked his ball than anything to an extent of even sleeping with it in his bed, probably this explains why he even dropped out of school in primary five, though school fees were also a burden to me,” she told mourners in Kampala.

Musisi, 38, was laid to rest on 15th December 2005 at his grand father’s cemetery, at Buziga Salaama amidst tears from hundreds of mourners.

Described by many as Uganda’s soccer prodigal son, Musisi started his career with second division side Mulago United before joining Pepsi F.C in 1987.

While at Pepsi at only the age of 16, the striking skills of the burly teenager started magnetizing local scouts from the big super division clubs.

In 1994, the then S.C. villa tactician Paul Ouma lured him to Villa park where he had a successful 8 year stint, before joining the paid ranks in France to become the first ever Ugandan player to play professional football in Europe.

At Villa park, his combination with the other deadly genius talents of Sunday Mokiri, the late Paul Hasule, William Nkemba, Corner specialist Sula Kato among others, seemed as natural as God- sent and scoring goals became one of Musisi’s hobbies, averaging a goal per game.

Musisi was a perfect game reader, a dead ball specialist who could score from anywhere with in and out side the box. His head was as good as his feet.

It is said he had such a high passion for scoring that he took with him whether in training, friendly or competitive matches. It is from here that the stout sniper started getting nick names like “Magic” because of his stupefying tactics to create and score goals, and “Tyson” for his physique in comparison with Mike Tyson the then world’s heavy weight Boxing champion.

Musisi loved training and hardly missed any session, rarely got injured or missed a match, whether a friendly or not, and that made the fans from rival clubs to assert that Villa players don’t get injuries and that they neither lose relatives nor attend burial ceremonies.

Musisi inspired Villa 4 league titles, ACECAFA championships, Hedex cup and the most memorable one, to the finals of the Abiola cup in 1992 and African club championships in 1991 where he was the top scorer with 10 goals. In this same year, he was among the nominees for the African best player award.

Before joining Rennes of France in 1992, the Villa marksman attempted to break Jimmy Kirunda’s record of 32 league goals when he scored 28 goals but departed for Paris with 4 league games to go. At his scoring rate, striking 5 goals in four matches, he could have easily surpassed that record.

After spending two seasons with the French side, he was sold to a Turkish top division team, Bursaspor and later to Dardenelspor at 1.8 billion Ugandan shillings transfer fee, making a record in the transfer market for the most expensive Uganda import. In 1996 season, he was voted as the best foreign player in the Turkish league.

In 2001, the Hit man made a U-turn to his dear club S.C. Villa after Dardenelspor was relegated to a lower division. He guided S.C. Villa to the E. African Hedex trophy and a super league title. It is alleged that he was receiving 0.5 million shillings per game he featured in, an attribute to the quality of player he was, given that most Ugandan players barely get 0.1 million shillings per game.

In 2002, he relocated to London before joining Ggaba United where he ended his soccer career.

Majid Second right waiting for the ball from the referee in a 1992 Match after scoring a hat trick.

You remember these games?

In some of his memorable strikes, in 1992 in his last appearance in the blue and white jersey of S.C. Villa, before joining the paid ranks, he single handedly demolished KCC FC as he was 4 times on the score sheet in the historical Villa’s 5-0 league win at Masaka recreation ground.

In 1991, he scored an equalizer in the dieing minutes of the game against Nigeria’s Iwanywanywu in the African club championship to take his team to the finals.

In 1996, he registered a hat trick with super headers in the Cranes 5-0 humiliation of Amavubi stars of Rwanda at Nakivubo in the 1998 African cup qualifiers.

In 1991, Villa had lost to Moneni Pirates of Swaziland by 1-nil in the first leg of the African club championship but Musisi turned the deficit to a 2 -1 win in the second leg. In 2002 at Mbale municipal stadium, Mbale heroes was leading Villa by 3 goals to nothing in a super league tie, Musisi came off the bench to score 2 goals with in a space of five minutes, forcing the hosts to abort the game.

The other side of Musisi

The social life characterized by soccer greats say George Best, Eric Cantona, Paul Gazza, didn’t spare the Ugandan super star as he used to often hit headlines on wrong notes, probably due to his stardom, illiteracy and love for alcohol despite being a Muslim.

In some of the nasty incidents, he declined to forego the cranes trip to Kinshasha against Zaire in the 1994 African cup qualifiers decider in his famous “Mugende Mukafilemu” slogan, after FUFA suspended his club captain Paul Hasule for allegedly boxing the referee in a league match. The cranes needed a win to qualifier for the finals but only managed the draw.

In 1997, he was jailed for allegedly defiling a 16-year-old student. He deliberately showed his butt to the late Villa chairman after some wrangling with him.

In 2002 the then Cranes technical director, Paul Ouma forced him to pack his belongings and leave the Cranes Camp in Jinja after taking alcohol to his team-metes.

In 2003, Musisi appeared on the pitch drunk and staggering during the Lugave vs Mamba match in the Biika bya Baganda finals.

No matter his off the pitch behaviors, Musisi will always remain in Uganda’s book of records for his Magic displays and passion for football. May the almighty Allah rest Majid’s soul in internal peace.