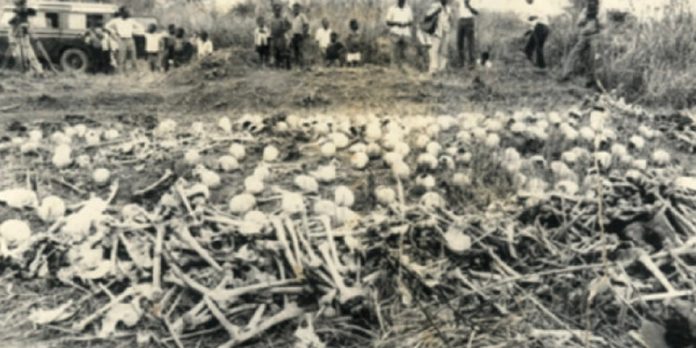 The term genocide was coined by Raphael Lemkin in 1944. He wrote that genocide is “the coordinated plan of different actions aiming at the destruction of essential foundations of the life of national groups with the aim of annihilating the groups themselves. The objectives of such a plan would be the disintegration of the political and economic institutions of culture, language, national feelings, religion, economic existence, of national groups and the destruction of the personal security, liberty, health, dignity, and even the lives of the individuals belonging to such groups. Genocide is directed against the national group as an entity, and the actions involved are directed against individuals, not in their individual capacity, but as members of the national group”(Samuel Totten et al., 2004).

2. In October 1946, a few days after the Nuremberg Tribunal judgment was announced, Cuba, India, Panama and Saudi Arabia demanded that the UN General Assembly correct the limitations on the concept of crimes against humanity. The Nuremberg Trials (1945-46) and the Tokyo Trial (1946) crimes against humanity were included only to the extent they were connected to the war.

3. The Nuremberg Trials and the Tokyo Trial set a new procedure in international law: no one, whether a ruler, a public official, or a private individual, was immune from punishment for war crimes. These crimes included crimes against peace – namely, planning, initiating and waging of wars of aggression in violation of international treaties and agreements, crimes against humanity – extermination, deportations, and genocide; war crimes etc.

4. The UN General Assembly adopted in December 1946 a Resolution 96(a) on the crime of genocide. The resolution mandated the United Nations to draft a treaty on genocide.

6. Article I – The contracting parties confirm that genocide, whether committed in time of war or in time of peace, is a crime under international law which they undertake to prevent and to punish.

7. In the present Convention, genocide means any of the following acts committed with the intent to destroy, in whole or in part, a national, ethnical, racial or religious group as such:

Article IV – Persons committing genocide or any of the other acts enumerated in article III shall be punished, whether they are constitutionally responsible rulers, public officials, or private individuals.

The word genocide refers to the destruction of a culture as well as the physical elimination of people (A. Belden Fields 2003) in whole or in part and the taking away of wealth of victims of genocide. The Swiss banks are revealed to have accepted and kept wealth stolen by the Nazis from their Jewish victims (A. Belden Fields 2003).
In some cases like Burundi and East Timor the world pretended not to know or knew very little. “For a long time that was the case with East Timor, where it is estimated that one-third of the population had been killed by the Indonesian military from 1975 to 1999, where there was torture and forced sterilization of women, and where the indigenous language was forbidden (a genocidal measure to destroy a people’s culture and identity). In other cases, there is even active complicity of one or more Western democracies…”(A. Belden Fields 2003).

Diverse strategies are used to carry out genocide. It should be noted that mass killing or physical liquidation is one of many strategies. Genocidal strategies may be direct or indirect, “including economic or biological subjugation”. They may include “killing of the elites (i.e. elicitide); elimination of national (racial, ethnic) culture and religious life with the intent of ‘denationalization’ and ‘prevention of normal family life’ … breaking the linkage between reproduction and socialization of children in the family or group of origin … preventing births within a group”
A consensus exists that genocide is committed with intent to destroy, is structural and systematic, deliberate and organized, sustained and involves a series of purposeful actions. Jack Nusan Porter (1982) wrote that genocide is the deliberate destruction in whole or in part, by government or its agents, of a racial, sexual, religious, tribal or political minority. It can involve not only mass murder, but also starvation, forced deportation, and political, economic and biological subjugation. Genocide involved ideology, technology and bureaucracy/organization. Yehuda Bauer (1984) mentions selective mass murder of elites or parts of the population and the intention to denationalization, enslavement and destruction of economic life (Adam Jones 2006).

Some have described the wars, destruction of property or grabbing there of in Luwero Triangle, northern and eastern regions as genocide which has continued after the conflicts ended. Using the information provided above is it possible to establish a concrete case so that at least we can stop its continuation into the future and spread to or intensification in other regions? Apart from loss of lives are there other cases like loss of properties say land taken over from survivors using different means? For example, what happened to the properties like buildings in towns and money of the victims in the banks at home and possibly abroad? Did the survivors reclaim them? If not, why not?

The genocide convention is about prevention and punishment of those involved as described above. What we have learned is that genocide is more than merely destroying a targeted group in a time of conflict. It includes destroying a culture of a group that loses identity. It involves impoverishing and rendering a group powerless and voiceless through reducing its population growth, scattering it people around and taking its properties especially land. Genocide can happen silently in time of peace and can take a long time to achieve. Where do we stand in Uganda where allegations of genocide have been made?

Official Mailo Estates Should be Under Buganda Government