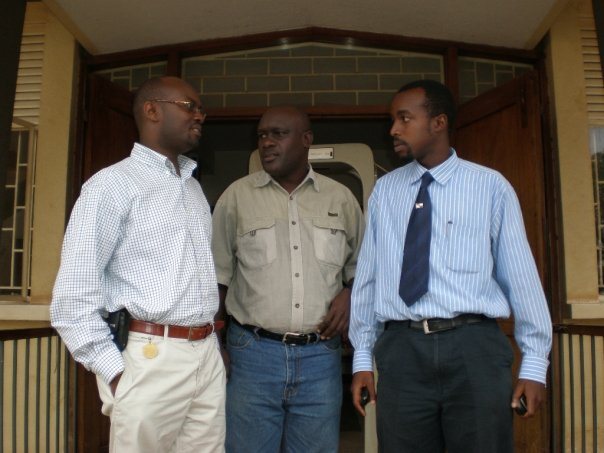 Mwenda is a very unethical journalist, at least as far as his coverage of Rwanda is concerned. He was on Dr. Emmanule Ndahiro’s pay-roll, the man who  foresees ‘selling Kagame’s image”.Mwenda was blindfolded by the money he was making when he was in The Monitor. It was compulsory that time, for each governmnet office in Rwanda to buy The monitor every day. Mwenda sold his professional conscience for this money. Yes, he got the money … what better person has he become? Kagame and his Junta spent a lot of tax-payers’ money advertising useless things in the Monitor under Mwenda. That was a kind of kick-back!! He got that money, Rwandans still will ask Mwenda, what does that blood-socked money mean for you? When he fell  out with The Monitor, Mwenda, through Ndahiro secured an order from the President, Kagame, prohibiting all governmnet offices from buying The Monitor. Anybody who violated this order would be jailed!!! 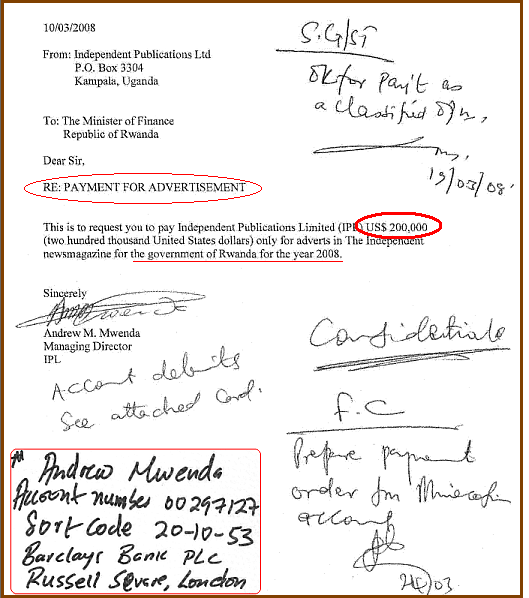 Mwenda secured money from the same people, Kagame and Ndahiro, to start his own news paper called the independent. He got the money.. and what better is he now? Mwenda should apologize to the people of Rwanda for sustaining the Dictator. For feeding the world with information about Kagame and the country (Rwanda) which he knew was absolutely false. Poor Mwenda, you sold all you are for silver!!!

For your information, the Classified” account from which Mwenda is paid in Kigali is meant for procurement of military hardware only!! This account is closed for any investigations or auditing. This is where Andrew Mwenda gets his pay cheque.If any journalist in Rwanda had a deal with a hostile country, Kagame would slaughter that journalist in broad day light. M7 has not done this to Andrew Mwenda. And Mwenda tells us that Kagame is the best African leaders!!!!! Man defendth where he eatth!!! In that vain, please, especially during this time when most of us strategizing to get this undeducated dictator out, please, keep Mwenda out of the picture.

The scheme was “selling Rwanda’s image abroad”. Mwenda received millions of shillings!!!!  Some cheques passed via my office!!!! Secondly, Mwenda betrayed the two countries namely Uganda and Rwanda. He misrepresented himself to Kagame and Ndahiro that he was the closest person to Uganda’s intelligence and the First Family (M7) and so he had all the intelligence pieces we needed from Uganda. Actually, because of Mwenda’s thirsty for Money, we nearly had a head-on confrontation at our common boarders (Uganda and Rwanda).

Mwenda appealed so much to Kagame’s psyche, of course knowing that Kagame’s education is relatively poor, that he nearly convinced the guy that the only alternative was to fight Museveni. In the meantime, Mwenda was getting his Cameras ready to get “breaking news’ and sell his then Monitor.  Mwenda contributed close to 60% of the tension that there was between Uganda and Rwanda. Mwenda nearly ended us into an unfortunate war. Netters, it took us lots of efforts to convince Kagame that the war was not necessary. Unfortunately, Kagame trusted Mwenda’s “intelligence network” than ours!!! Owing to Mwenda’s irresponsible reporting and thirst for money, millions of our people in Uganda and Rwanda were going to die!!! Shame and shame to this Mwenda!! Once again, if Mwenda wants, I would not mind posting documentary evidence. But he has to request for it himself.

On Commander Kayumba, you need to know that our Tutsi community in Rwanda is divided into two major groups. The Tutsi who came from Ugandan refugee camps in the West and in particular those from Nakivale camp, and those who came from Uganda but not from refugee camps. Most of the time these groups are even hostile. Those who came from refugee camps, also called “Bakonyine” – very primitive – are generally uneducated, so frustrated by refugee camps life ( in most cases very malicious, heartless, no room for dialogue and above all, they tend to be extremists – they display spontaneous dislike for the Hutu). Those who were not in refugee camps are generally well educated, prudent, a little sympathetic and generally open to dialogue and mixing with the Hutu. (The two groups of Tutsi are perceived of other groups of Tutsi in Rwanda as the super Tutsi. The relationship between these two group of tutsi and toehr Tutsi in Rwanda is that of distrust). Yet the two Tutsi groups or camps ( from Uganda) do not like each other.

Kagame is from the Bakonyine while Commander Nyamwasa is ‘city-born’!!! The RPF in-house killings that happened immediately after Rwegema’s death, which were supervised by afande Kagame and Salim Sareh under M7′s coordination were also along these lines. It was basically the Bakonyine aganist city-born Tutsi. M7′s FRONASA basically recruited from the Tutsi refugee camps. So M7 automatically sides with the Bakonyine – on a typically good day – otherwise he shifts!!!!

M7 has another reason why he like the Tutsi from camps; they are heartless. You should have seen how they killed people in Luwero to know how hearless they can be. You also need to recall the Mbarara slaughters and the Distruction of Masaka town ( Masaka was not destroyed by Bakombozi from TZ as they cheat you. It was destroyed by M7 wing which closed in on Masaka from Mbarara side. That is way back during th Amin war. Talk of hearless people, you have these Bakonyine!

The bakonyine Tutsi group, Kagame’s group, is the one in control in Kigali. We who came from “cities” are second class Rwandans!!! The so called arrests  due to “corruption’ you hear about in Rwanda are simply an official way of the bakonyine eliminating the “city-born”. And then Kagame sells his name. The world says, look, he is arresting even RPF guys!!!Kumbe wapi. It is stage managed!!!Whenever either group  is in charge of an instituion, they make sure they employ from within their group ( bakonyine or city born).

Kayumba is one of the many victims of this. When he bacame RPF boss, he revenged. He promoted “city born” guys in the army. The bakonyine felt so bad!! Morever, because the “city born” find it easy to work with the Hutu, Commander Kayumba was in good books with General Habyarimana Emmanuel when this General was the Minister of Defense in Rwanda. Kayumba himself helped General Habyarimana to escape through Uganda. Actually, the day before Kayumba left Rwanda, he made a phone call to General Emmanuel Haybarimana.

Let Kagame not cheat you that he sent Commander Kayumba to UK for studies. He had refused to sign for him although the guy had everything including scholarship.  When Kagame had gone Ethiopia for a mission, General Emmanuel Habyarimana signed for Kayumba to go to UK. That is how Kayumba left Rwanda for UK.

Censorship Ahead of the IPU Assembly: On Nodding Disease