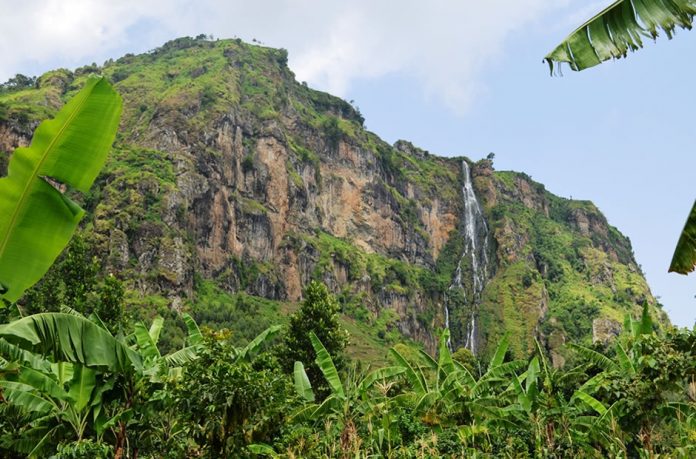 There’s nothing arguably soothing and quiet like standing at the top of a mountain, with the clouds and the rest of the world stretched out below you.

The exhilaration of completing a difficult ascension, the camaraderie of your new climbing friends, the knowledge that you’ve accomplished something that few others have, and the feeling that you’re truly at the top of Uganda is truly remarkable.

It is therefore, no wonder that once people start climbing mountains, they never want to stop! It becomes addictive.

Embarking on a climb in Wanale Mountains provides opportunities for all abilities, from the seasoned trekker to the extreme mountaineer.

For me, being in the mountains calms my mind and brings clarity and as my gasp for oxygen becomes greater, the chaos in my head becomes quieter.

And I want to state without haste that climbing allows me to shatter the perspective of what I can achieve, how far I can go and what I can endure.

My travel to Wanale Mountain has also given me a new definition of friendship and trust, knowing that the partners I choose to be with have my life in their hands, and theirs in mine.

Wanale ridge [Nkokonjeru] is Mbale’s mightiest mountain system, containing peaks and stretching more than 2,000 Ft across Mbale District, associated with great adventurers and mountaineers; this is a place like no other: remote, majestic and romantic.

Any visitor to Mbale will see it, standing tall with pride and grandeur; it is such an imposing beauty from a distance.

Wanale ridge has had a magical appeal for many who have been in Mbale, as it looks to be a stone throw away from the town.

Many Mbale municipality visitors will gaze upon the imposing beauty from a distance with bewilderment. But a real visit up close with Wanale will reveal just how much Uganda is gifted by nature; a true ‘Pearl of Africa.’

Rising majestically above Mbale municipality, the 2,864 ft ridge has beckoned too many climbers who have visited Mbale since it became a town by Mr. H. Hesketh Bell, then Her Majesty’s Commissioner on June 26, 1906 according to the Official Gazette of the East Africa and Uganda Protectorate Vol. VIII No 161.

Given its height, Wanale ridge can be viewed from all areas in Mbale and neighbouring districts. It covers a huge portion of Bugisu’s land surface.

The ridge has shimmering stony hills that look like a white sheet across the rocks and maybe that is why the Late Semei Kakungulu, the colonial agent described it as a white cock [Nkokonjeru].

Mbale town literally lies at the foot of this ridge. From town, one can discern three splendid looking waterfalls which all originate from the mountain top, many a visitor mistake it for Mt Elgon.

Wanale or Nkokonjeru Mountain, as some people call it, is an impressive mountain replete with precipices, escarpments, deep valleys, water streaked cliffs, caves and rocks.
“Wanale is Bugisu’s temple of nature. From history, many visitors were awed at the sight of this mountain. The waters that flow from Mt. Wanale spread to every river in Uganda,” says William Madanda, 71, an elder in Wanale sub-county.

Although little talked about Wanale is worth talking about, it is also worth visiting. The place has had unique happenings and history.

For trekkers or climbers, Wanale should be a great attraction; the ascent to its peak is exhilarating. Wanale ridge or Nkokonjeru, as some people call it, is an impressive mountain replete with precipices, caves and rocks.
According to Mr Madanda, Wanale Mountain is named after one of the sons of Masaba; the patriarch of the Bamasaba [Bagisu], Mt. Wanale is believed to be the place where Nabarwa, the Kalenjin woman who prevailed upon Masaba to get circumcised before they got married, came from, on her way from Kenya.

Mr Madanda says that the Nkokonjeru name that the colonial agent Semei Kakungulu’s people used to refer to that mountain came from the legend that Wanale, son of Masaba, reared only white chicken.

Ms Agnes Nakuhumitsa, 67, from Mukhuwa village in Wanale says many of the mountain’s earliest inhabitants lived in caves and that such caves are still existent at this mountain.

“There are many caves on the mountain, though people know only one, the Khaukha cave. The early Bamasaba who called Wanale home dwelt in these caves,” says Ms Nakhumitsa.

“A hike through a trail at the western end of the ridge will lead one to Khaukha cave, which is the most prominent cave of this mountain,” Ms Nakhumitsa adds.

She explained that if you are into mountain climbing or trekking, Wanale should be a great attraction, the ascent to its peak is exhilarating.
Legend has it that Khaukha cave which has calligraphic inscriptions on its walls, has an ill-fated water stream and one such inscription reads, ‘James Wambwa was here, remember me.’’

The hike to the mountain will take you through breathtaking nature and forest walks over water streams as the trail painstakingly winds its way through numerous homesteads with coffee and banana plantations with barely-clothed and barefoot children in mud and wattle houses that stand proudly in the plantations.

Mr Fred Kizza, the Mt Elgon conservation area manager says that Wanale ridge is part of Mt Elgon protected area and that it is one of the peaks of Mt Elgon that was thrown far away to Mbale during volcanicity age.

He explained that Mt Elgon is an extinct volcano that first erupted more than 24 million years ago. With the largest surface area of any extinct volcano in the world (50 km by 80 km), Mt Elgon is the fourth highest mountain in Eastern Africa, with the second-highest peak in Uganda (Wagagai– 4,321 metres).

“A lot has been written about Mbale and its mountain ranges that give the town breathtaking scenery, but you have not seen anything yet if you have not visited the place, actually Mt Elgon is a land of a thousand falls,” said Mr Kizza, also chief warden Mt Elgon national park where Wanale is found.

Mr Elizafari Wambedde, an elder from Mukhubu village in Mbale City says the cave has unsaturated salt locally known as magadi in Lumasaaba or Mukambizi and kisuula in Luganda or rock salt commonly eaten by animals and people.

Legend has it that Khaukha cave has an ill-fated water stream known as Mwausa, a tale supported by one of the residents.

He adds that the other wonders that Wanale offers are its many cascading waterfalls; Namatsyo waterfall, for example, drops two miles down from the mountain top and makes deep tunnels in the rocky bottom.
“The waterfall disappears down in the rocks under. It is completely obscured and immersed then the water re-emerges and hits the surface from its underground pathway in villages of Bumboi and Mooni in Mbale City,” Mr Wambedde adds.

Wanale Ridge Water Falls is a spectacular waterfall where water cascades over 2864 feet, over 1300 meters down the sheer cliff rock wall onto the valley.

You will hear a clapping sound, a rumbling and roaring, a wave of white surging down the mountain side and a huge wall of mist crashing down as you climb the mountain.