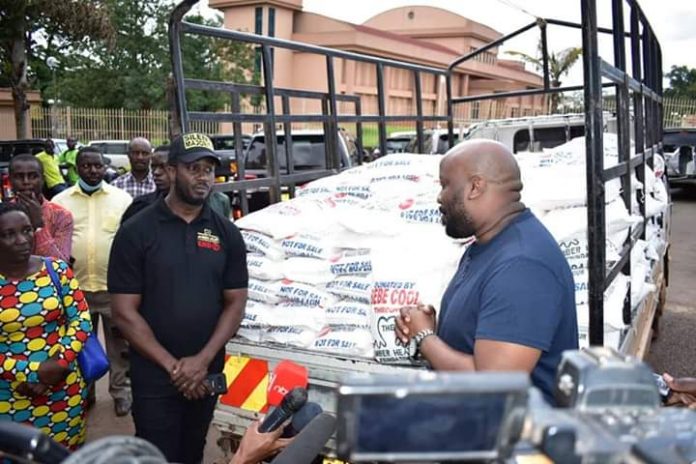 Speech  By H.E. Yoweri Kaguta Museveni
President of the Republic of Uganda

At the OAU/AU 50th Anniversary

As we celebrate 50 years of Independence, we need to ask ourselves the following questions:
1.    Why were we colonized?  Why could we not defend ourselves and preserve our sovereignty?  Why couldn’t the African Peoples, who are similar or linked, work together to defeat Colonialism?
2.    Are we aware of what happened to the other conquered peoples in the World?
3.    Why did the African Peoples survive the nightmare of colonialism and slave trade?
4.    How did we regain our freedom?  Which factors helped us to do so?
5.    How have the African peoples worked to insure their freedom since Independence?

Africans insure cars, houses, etc.  How have we insured ourselves and our future as free people since Independence?

I have addressed these questions before.  However, there is no harm in answering them again because a convergence on these issues has not yet emerged among our people.

The answer to the first question is that we were  colonized because we were not united in spite of the similarities among us and the linkages we have.  Some people try to use the excuse of the superior technology of the Europeans.  I do not accept this excuse because the Chinese and the Japanese were also lagging behind the Europeans in technology. The Europeans could not, however, defeat them, not for lack of trying.  They were too big to swallow.  On account of a higher degree of integration, our Ethiopian brothers and sisters were able to defeat the imperialists.

The Chiefs that should not be forgiven are the ones of the Great Lakes area and Southern Africa.  Vasco Da Gama went around the Cape of Good Hope in 1498.
The Portuguese, thereafter, started frequenting the East African Coast.  These Chiefs of ours could have seen and heard that a new power, with stronger weapons, had come on the scene.  It was not until 1862, a full 364 years afterwards, that the European aggressors got to Uganda.  Why couldn’t our ancestors get together and plan to defeat them?  No. Instead, they were busy fighting each other and even assisting the slave trade by selling the captives from neighbouring tribes to slave traders.  Poor political organization, lack of political integration, was, therefore, the main cause of our defeat.  The fire-weapons of those days were not much better than spears or arrows, especially in the Tropics where there was a lot of bush cover.

You know what happened to other conquered peoples – the Indian Americans, the Incas, the Aztecs, the Australian Aborigines etc.  They either disappeared (were exterminated) or are marginalized.
Why did we survive colonialism, slave trade etc?  It was because of our strong genes and advanced civilization.  Since we had achieved advanced agriculture, the domestic animals we kept had inoculated us against the zoonotic diseases (diseases that go from man to animals) that had exterminated the other indigenous peoples.  Our survival proved that we were strong genetically and culturally (civilization, agriculture, science).  However, our shameful colonization proved that we were weak in terms of political organization.

How, then, did we regain our Independence?  It was on account of three factors:
i)    The continued resistance of the African peoples – initially by the Chiefs – Cetswayo, Lobengula, Mkwawa, Kabareega, Mwanga, etc, but, eventually, by the liberation movements or mass political organizations – Nkrumah, Azikiwe, Nyerere, Lumumba, Luthuli, Mandela, Thambo, Sisulu, Kaunda, Ben-Bella, Musaazi etc, etc.
ii)    The mutual weakening among the imperialist countries with their inter-imperialist wars – the so called First and Second World Wars.  Even after these horrible wars among the imperialist predators, in which a total of 1.8 million Africans were used as cannon fodder, the imperialist countries tried to re-impose their colonialism – in Kenya, Indo-China, Southern Africa, etc.

iii)    The support our cause got from the Socialist countries – the Soviet Union, China, Cuba, etc.

These were the three factors that enabled us to regain our freedom.

The final question to answer is:  How have we worked, since our liberation, to insure ourselves from the present marginalisation or from future re-colonization?  We have attempted 50% of what we should do.  We have attempted economic-integration – with ECOWAS, COMESA, EAC, SADC, etc.
This is good.  This is one of the factors the African economies are growing at the rate of 5%- per annum while some other parts of the World are growing at miserable rates.  Even here, a lot remains to be done.  You still have unnecessary non-tariff barriers, unequal distribution of benefits within the economic blocs, insufficient attention to infrastructure (e.g. electricity where the Khw per capita is as low as 12 in some African countries while in the USA it is 14,000), inability to build effective State pillars in some cases etc.  Nevertheless, Africa must be commended here because, at least, we have started on the long journey to economic integration.

Where performance is totally deficient is in the other 50% – political integration.  Apart from Tanzania, which was moulded by our great leader Mwalimu Nyerere along with another freedom fighter, Mzee Abeid Karume, nothing has been done on this crucial front.  You remember the first sin of our ancestors was failure to unite politically.
That is why we were colonized.  This failure is not excusable because the African peoples are either similar or linked.  They are just grouped into four linguistic groups: the Niger–Congo groups of languages (including the Bantu and Kwa languages), the Nilo-Saharan (Cushitic, Nilotic languages), the Afro-Asiatic (Arabic, Amharic, Tigrinya etc) and the Khoisan languages of the click speakers of Southern Africa.  This is a cardinal mistake which this Anniversary Convention should revisit.

In the EAC we are very explicit on this issue.  Our treaty aims at an eventual Political Federation of East Africa.  We cannot guarantee the future freedom of Africa, the way we are organized politically today. Why do we get mesmerized and are awed by the strength of others but do not strive to build our own strength?  If we admire the strength of the USA, China, Brazil, etc, let us build our own strength.

All the raw materials are here – similar or linked peoples and a common land mass that has got all the resources we need to build incredible strength, with very rich islands around it and two vast Oceans – the Indian Ocean and the Atlantic Ocean – giving us huge marine resources.

You remember, I did not support the ideas of the late Muammar Gaddaffi of uniting politically the whole continent.  However, there are parts of Africa that can unite politically. Economic and political integration are the two factors that can give full meaning to the renaissance of Africa.  Renaissance means modernization and integration (economic and political).  We cannot take renaissance to only mean singers, paintings etc.

When Africa acts together, we win.  The founders of the OAU determined to defeat, militarily, the incorrigible colonial and racist white regimes that were controlling Southern Africa at that time.  Many people thought the Africans were joking.
However, by 1971, Frelimo, led by Samora Machel, had defeated the big offensive, “Operation Gordian Knot”, by the Portuguese General Kaulza D’Arriaga, leading an Army of 70,000 Portuguese soldiers in Mozambique.

The blows the Portuguese were receiving in Mozambique were duplicated in Angola and Guinea – Bissau.  By 1974, the Fascist Regime in Portugal had collapsed.  Africa had liberated Portugal from fascism and had also liberated Mozambique, Angola, Guinea-Bissau and Sao Tome.  The defeat of the Portuguese in Mozambique, led to the defeat of the Ian Smith White regime in Zimbabwe.  Zanu and Zapu were leading that struggle.

By 1994, South Africa and Namibia had been liberated by military action.  When Africa unites, nothing can stop us.

In those anti-colonial wars, Africa was supported by the Socialist Countries (the Soviet Union, China, Cuba etc) with military equipment and know-how.  Some of the Western countries were giving non-lethal aid -scholarships, relief for refugees etc.  These were mainly the Scandinavian countries, Holland etc.

In our Luganda dialect, we say: Agali awamu gegaluma enyama” – teeth that are tight in the gum are the ones that can successfully chew meat”.

YOWERI KAGUTA MUSEVENI
PRESIDENT OF THE REPUBLIC OF UGANDA

Museveni Reacts on the 20 million shillings Given to MPs