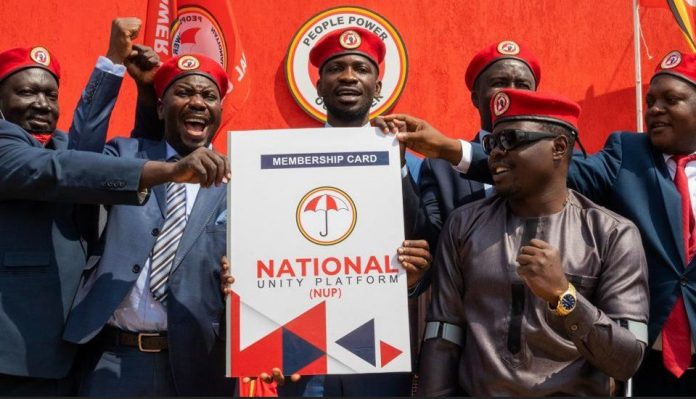 Two people have petitioned the High Court in Kampala accusing Bobi Wine of illegally acquiring, assuming ownership and leadership of the party.

Difas Basile and Hassan Twala filed the case challenging the Kyaddondo East MP as the flag bearer of the National Unity, Reconciliation and Development Party (NURP) for the 2021 general elections citing violation of the constitution.

Describing themselves as part of the founders, the two men allege that the change of the party name by the Electoral Commission from NURP as per the registration certificate to NUP as gazetted are illegal, null and void as they are not supported by the requisite resolutions under their party regulations.

Through their lawyers, the two NURP founders are seeking for court declaration that the change of their party colours and symbol as gazetted is illegal as it did not backed by resolutions and that it infringes on various sections of the Political parties and Organisation Act of 2005.

“A declaration that the extra ordinary delegates’ conference allegedly held on July 14 to elect new political leaders of NURP/NUP party was illegal and an infringement of the Party Constitution, the National Objectives and the Political Parties and Organisations Act,” reads the complaint.

It is alleged that the election of  Kyagulanyi as party president and others in positions of Secretary General, secretary for information, secretary for women affairs, secretary for national mobilisation and senior administrative secretary of the party was illegal.

They are seeking for court to declare that the alteration of the list of founder members in NURP party Constitution of 2004 was fraudulent and illegal and that the Electoral Commission breached its statutory duty to ensure compliance with the provisions of the Political party and Organisations Act.

“An order that the tenth respondent (EC) should degazette the change of the party name appearing under the General Notice no. 838 of 2019, de-register the change of name to the National Unity Platform and re-instate NURP as the legally recognised party name and the gazetted party colours and symbols,” reads the court documents.

The complainants have also filed an application to temporarily block the accused persons from seeking nomination until the main case is determined by court.

They also want the accused persons; Kyagulanyi, Robongoya, Kabanda, Ssenyonyi, Nabagabe, Fred Nyanzi Ssentamu and Kagombe stop holding themselves or any person deriving authority from them to hold out as the elected political leaders of NUP or NURP party.

Meanwhile the case awaits response from the accused parties before it can be fixed for hearing.

This is the second trouble faced by Kyagulanyi in his struggle for presidency. Last week, Lawyer Male Mabirizi asked and got the academic papers of Kyaddondo East MP Robert Kyagulanyi Ssentamu alias Bobi Wine after observing some disparities in his age and education.

According to what Kyagulanyi reported to the public about his age and education, it would mean that he sat for his A levels at an incredible age of 15 years where majority of Ugandans at that time would be in primary seven or senior One.