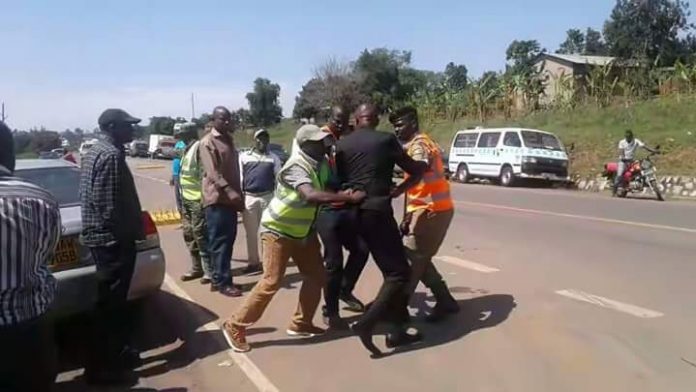 Edward Sibo, a lieutenant in UPDF who was not in uniform at the time and driving a small car, was stopped by traffic officers in the Fika Salama [Swahili for “arrive safely”] operation on Masaka Road.

The soldier instead drew a pistol and reportedly threatened to shoot the traffic officers.

A scuffle ensued in which five officers who were donning UNRA jackets overpowered the soldier and disarmed him.

They then arrested, bundled him up and rushed him to police.

He was detained at Central Police Station in Masaka town.

He has been handed over to UPDF for disciplinary action.

Likewise, Fika Salama officers also cornered a one Ali Idagiri who was impersonating a UPDF captain in Luweero district.

Idagiri was arrested together with a one Ondoga Stephen at Luweero Weighbridge and charged in Luweero court for impersonation.

The arrest of Lt Edward Sibo comes at a time UNRA and police are struggling to curb the rampant accidents along Masaka road.

The road has since become the planet’s deadliest highway.

Over 200 people have died on the road since January, calling it a massacre.