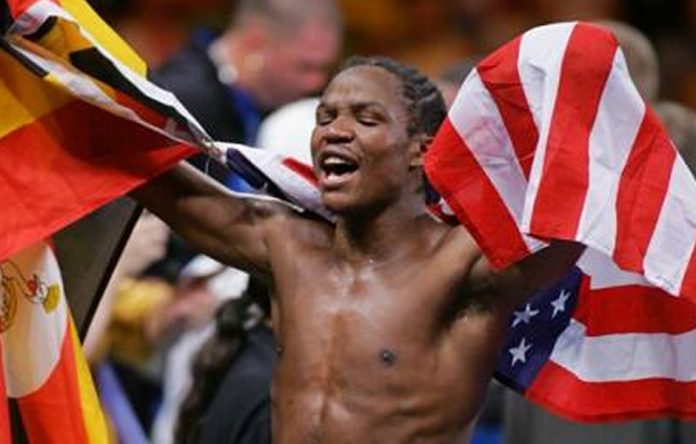 Former pro boxing champ Kassim Ouma, who has been in news of recent after being arrested over battery is back in the Uganda.

The former IBF junior middleweight champion and singer Juliana’s boyfriend Wednesday surprised revelers when he turned up at Club Amnesia.

Dressed in all black; shirt and a pair of trousers and shoes, Ouma made it to the club with his good, Bobi Wine and they were booked it the VIP section.

The crowd hadn’t recorgnised him at first but after DJ announcing the boxer’s presence in the club, there was a steer with everybody looking in all corners just to have a glimpse of the boxing champion.

There were wild screams and clapping from all corners but unfortunately, after only a few minutes, he left the ordinary section where majority of people were and headed for the VIP.

Uganda depressed in April after the arrest of Ouma in Los Angeles after allegedly knocking out a man who made gay advances towards him.

Ouma was born in Gulu, Uganda and left the country in the late 1990s after serving in the National Resistance Army for over five years.

This was after he had been selected to be part of the Ugandan National Boxing Amateur team trip to the United States and he opted to stay behind after the competition.

It was, however, his International Boxing Federation (IBF) Junior Middleweight world title triumph in 2006 that ushered him in Uganda’s public eye.

Ouma is a former champion and top-level contender in the Light Middleweight Division. He has quality wins against Jason Papillion, Juan Carlos Candelo and Verno Phillips, his second win against whom earned him the IBFLight Middleweight title.

It was only the second defeat of his career.

Since the Karmazin bout, Ouma has remained active in the Light Middleweight division, earning three wins, two by knockout. On May 6, 2006 Ouma defeated Marco Antonio Rubio by split decision despite being knocked down in the first round.

Ouma first returned in the country in 2007 after being pardoned by the army for deserting.

After years of Ugandan media speculation, ‘The Dream’ like he is known finally walked down the aisle on August 23, 2008, with long-time girlfriend Jalia Nandawula, a practicing nurse and pharmaceutical proprietor in Texas.

The boxer’s wedding came at a time when he and ex-lover, singer Juliana Kanyomozi, were having a rift. (In a highly publicized wedding-to-be, Ouma had promised to make Kanyomozi, also currently performing in the US, his wife in 2007.)

Meanwhile Ouma returned back to victorious ways in 2010, after a series of loses. This was after he, on September 25, 2010, stopped Joey Gilbert in the 6th round of their 10-round bout for the vacant NABA middleweight title at the Grand Siera Resort in Reno, Nevada.

He has since then went on to several boxing bouts.