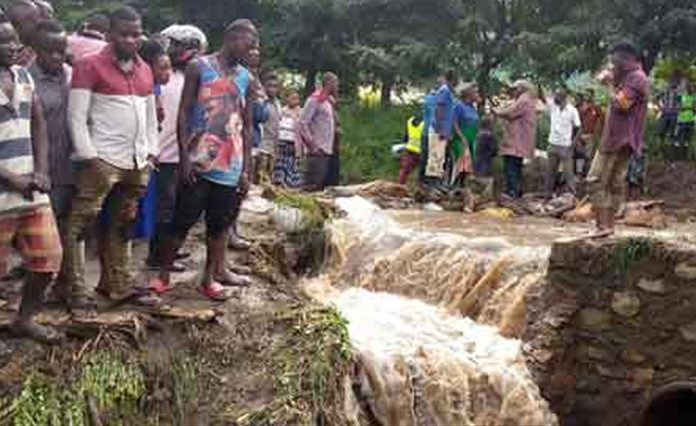 Fresh flash floods have claimed the life of a three-year-old child and destroyed various property and crops in Bundibugyo District.

The deceased minor has been identified as Nzebere Bwambale, a resident of Kitehe village in Kasitu parish in Kasitu Sub County.

The floods swept through Ntandi town council and Kasitu Sub County following heavy rains that pounded the area between 1am and 6am on Wednesday morning forcing River Nyabulere and Nyabughesere to burst their banks.

Moses Kisabayi, a relative to Bwambale’s family, says the minor was swept by running water while following her parents who had rushed to rescue property from their neighbor’s house that was on the verge of collapse following the heavy rains.

Asaba Galibulha, the Ntandi Town Council LC III Chairperson told URN that more than 800 households are estimated to have been affected by the floods.

He says the floods also washed away gardens of banana, cocoa and sweet potatoes.

Abdu Musinguzi, one of the affected residents says the destruction caused by the floods has made their area food insecure. He predicts famine, saying the area was just recovering from the rains of May that affected their crops.

Ronald Mutegeki, the Bundibugyo District LC V Chairperson, says they are currently assessing the level of destruction in collaboration with Uganda Red Cross Society and compile a report for submission to the Office of the Prime Minister for assistance.

Mutegeki also says that he has already notified Uganda National Roads Authority-UNRA to rehabilitate and open several roads affected by the floods.

Teams from Uganda Red Cross Society and World vision are already on the ground helping the affected families.

In May this year, floods killed a UPDF soldier and displaced more than 700 families after River Lamia burst its banks in Busunga Sub County.