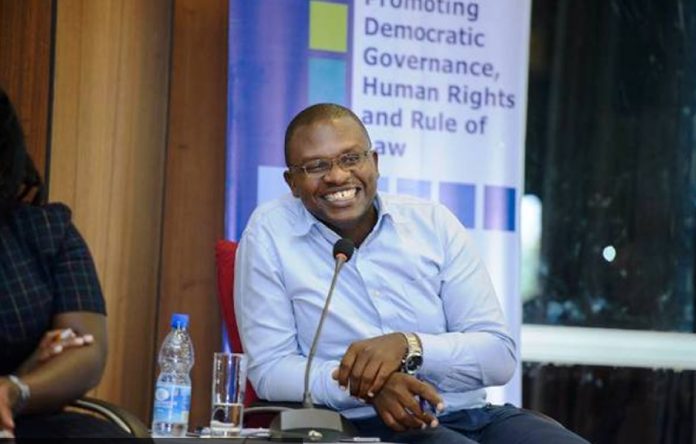 The organisation’s mission is to inspire innovation, investigative and professional journalism; and excellence among journalists and publishers to better serve the public.
Membership includes journalists, technologists, executives and publishers in Uganda who produce news for and support digital delivery systems.

ChimpReports’ Managing Editor Giles Muhame was elected President of the Association and will be deputized by Eagle Online publisher Richard Wanambwa. Muhame has an extensive experience in war reporting and co-founded news-breaking site, ChimpReports while Wanambwa served on Daily Monitor’s Investigation’s Desk.
Wanambwa broke the widely-publicized ‘Temangalo’ scandal and the leaked security paper that marked the beginning of the powerful Intelligence Chief Gen David Sejusa’s exit from the command of Uganda’s military.

Members at their general meeting further elected the youthful Campus Bee editor and founder, Emmy Omongin as the association’s secretary.
Omongin will be deputized by Showbiz co-founder, Denise Nankunda.
Showbiz, Xclusive, Big Eye, Matooke Republic, She Spell and Campus Bee are the top entertainment sites in the country.

Dixon Kagurusi Ampumuza, who possesses strong networks in the international community and co-founder of The Ugandan website, will serve as the association’s treasurer.

Kawoowo Sports founder and IT expert, Joseph Owino will serve as the Deputy Treasurer.
Owino has deep links in international social media networks especially Twitter which have benefitted many organisations and high profile individuals.

Kyamutetera will be deputized by Uganda’s finest crime reporter Stanley Ndawula.
Ndawula co-founded the Investigator website which has won praise for exclusive crime and political stories.

The newly elected association president Giles Muhame was upbeat about the association’s launch. “I believe an association like this that brings industry players together for a common goal is a game changer. I believe the leadership team headed by myself will steer the team to greater heights,” he said. Muhame called for an improvement in the integrity of the content on websites; and unity to build an enduring institution.

Earlier, Kyamutetera noted in a presentation that the association’s websites attract 5,292,828 monthly visitors (2,596,412 unique), more than the combined traffic of Uganda’s leading newspapers which have 3,909,700 visitors.

“With a Combined social media reach of 1,414,125- Facebook (1,215,430) and Twitter (198,295), we have the largest reach on social media,” said Kyamutetera.
The association has since called on government to urgently look into a policy that requires government agencies to consider online channels for their communications across board- including statutory notices.

It also urged government to relax and or change of government PPDA-focused media buying protocols as a way of earning government better returns on investment.
The association will spearhead efforts in training and skills enhancement of government and private sector communicators, to allow them appreciate and leverage the power of the internet.

Why Work with us

Internet is the fastest growing media- 25 percent with 2nd biggest reach after radio with 14,564,660 users = 40 percent penetration). The growing impact of mobile internet-7,461,035 subscriptions, presents an opportunity for real-time communications and engagement. 85% of active internet users are between 15-44 years (42 percent of population) and the most economically active.

We offer perhaps the highest reach online- a combined 7,132,278 on social media and website platforms.
We are flexible, non-aligned and offer partnerships that include endorsements, live event activations etc.

Unlike other traditional platforms, the internet offers a unique opportunity to promote Uganda locally, regionally and internationally, thus contributing to national goals such as tourism and investment promotion.