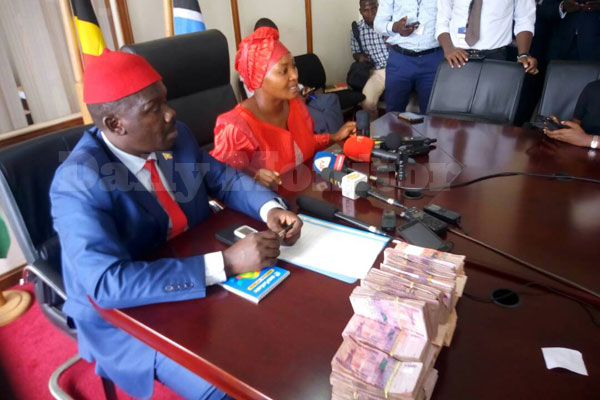 Opposition MPs have rejected the sh29m given to them by Parliament to consult on the lifting of the presidential term limits.

The MPs who turned up at a press conference in Kampala with red bags laden with cash said they decided to return the money because it is ‘morally wrong’ to accept it.

The MPs, who include Ibrahim Ssemujju, Muwanga Kivumbi, William Nzoghu, Angelina Osege, Robinah Ssentongo, Ana Adeke, Betty Aol and Moses Kasibante appealed to their colleagues from both the NRM and the opposition to return the money which they believe is meant to compromise them.

Ssegona, Adeke and Ssemujju who are members of the legal and parliamentary affairs committee, which is responsible for the Parliament’s budget, said the money was not budgeted for in the 2017/2018 budget.

“It is our role as Parliament to hold all state institutions accountable in the way they use public funds. We have in the past condemned many for diverting public funds into activities that were not budgeted for. We cannot, therefore, allow Parliament to commit the same crime of misusing public funds,” Ssemujju said.

The development comes less than 24 hours after Parliament announced it had credited accounts of more than 400 MPs to do countrywide consultations on the impending amendment to the constitution to remove the presidential age limit.
But the MPs said they could not be party to a move that seeks to subtly use consultations to bribe MPs and their constituents to change the country’s constitution.

“The public thinks leaders must obtain money and bring it them. [But] a good leader must bring hard, earned money not dirty money,” said Muwanga Kivumbi, the Butambala country MP.

“We want the IGG and Auditor General to prove the source of money. We didn’t budget for it as Parliament,” he Semujju said.

Leader of Opposition in Parliament, Winnie Kizza, wondered if it was necessary for them to carry out any consultations because Police has not allowed opposition MPs to meet gatherings in the constituencies.

Chris Obore, the parliament’s director of communication, said yesterday that sh13b had been released for MPs and that both MPs on the Opposition and NRM sides would get the cash.

He said the money was removed from the accounts of Parliament from their other votes such salaries but that the Ministry of Finance would reimburse it in due course.

The private members bill championed by Igara West MP Raphael Magyezi seeks to delete article 102 (b) to remove a cap in the Constitution that bars anybody above 75 years of age and below 35 to run for presidency.

The move, however, has received stiff resistance from a number of groups, including religious leaders, the civil society and legal fraternity.