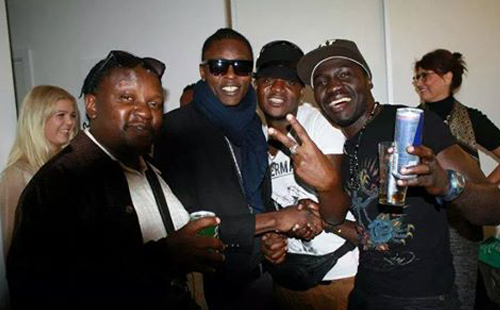 Tubonge star, Jose Chameleon has yet again buried his hatchet with another singer thanks to Legendary Ugandan Ragga artist Ragga Dee.

Chameleon was over the weekend re-united with his former Leon Island crew member and nemesis, DJ Micheal by the Balalu singer, Ragga Dee.

Ragga Dee, who has had over two beef-free decades in the Uganda music industry talked to the bickering musicians and his efforts and were worthy after the singers agreed to forget their past and think about the future of the industry.

In 2009, Chameleon fell out with Dj Micheal, formerly a member of Leon Island, managed by the former after a steamy verbal exchange in which the singers almost exchanged blows.

The singers were reportedly fighting over a one Sherry Adyeri, popularly known as Maama Cheri, owner of Kabalagala based nightspot, Cheri Cheri.

They were all alleged to be in a relationship with Sherry but the situation soured after DJ Micheal’s weekly performance was halted and replaced with Chameleon’s.

Micheal unhappy with the decision has since then released two songs Kilimululu and Fake doctor, all hitting at Chameleon.

This is Chameleon’s reconciliation with a biggest Ugandan singer follows last year’s re-union with the GoodLyfe duo, Mowzey Radio and Weasle.

Radio and Weasle just like Micheal, were never looking eye to eye with their former boss since their departure from Leon Island crew.

Meanwhile the reconciliation comes at a good time given the fact that Chameleon is trying to re-unite his warring young brothers, Weasle and Pallaso as this will act as an example to them.