More
HomeLawsBasongora Run to Court for a Separate Kingdom

Basongora Run to Court for a Separate Kingdom 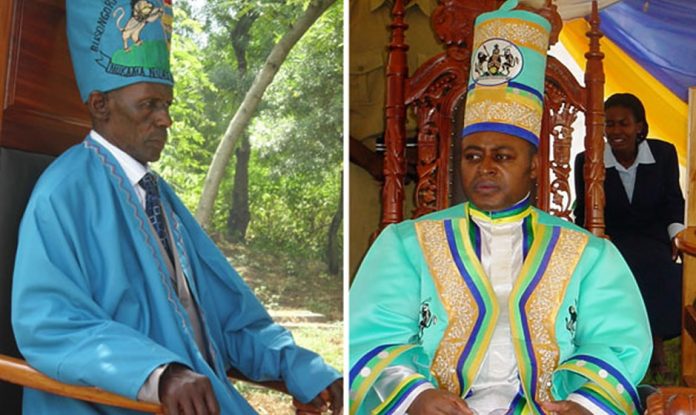 Three Basongora elders have petitioned the Constitutional court, claiming they are discriminated against in Kasese, a district dominated by Bakonzo.

Basongora pastoralists are a minority of about 15,000 people who have lived in the lowlands of Kasese for ages.

According to the trio, the actions of the respondents have violated their rights and resulted in their displacement from their ancestral lands and failure to be adequately compensated for loss of their land and property.

Through Karuhanga and Tabaro Associates, the Basongora also claim that the actions of the respondents have led to the disruption of the community’s pastoral enterprise and violation of their right to practice their religion and culture.

The petitioners accuse the Kasese District local government of insisting on teaching Bakonzo (Lukonzo) language in schools, which according to them discriminates the Basongora people, yet the law provides that children in schools must be taught their local languages.

In 2004, they said, the ministry of Education and Sports passed a statutory instrument to the effect that there should be thematic teaching of local languages from primary one to primary four.

However, it’s the petitioners’ contention that the Kasese District local government passed a resolution that Lukonzo be taught in all primary schools in Kasese, thereby negating the fact that there is another language of Basongora that live in the same district.

Another accusation leveled against the district authorities by the petitioners is that they have continued to subvert the creation of new districts, which would give the Basongora reprieve from discrimination.

It’s their contention that on October 12, 2010, a motion was moved to split Kasese into three districts; namely, Rwenzori, which would have two constituencies of Mubuku and Kuruhe, the main Kasese district with Kilembe and Katwe constituencies, as well as Kasese municipality.

That said, the petitioners are also critical of the way, the intended districts were demarcated.

They say the proposed districts were demarcated vertically, thereby emerging from areas predominately occupied by Bakonzo, rather than follow natural features such as streams and rivers.

They assert that such moves were calculated to divide and disunite the Basongora more and deny them a chance to contest for a political office and emerge winners since their numbers in such constituencies would be much smaller compared to the Bakonzo occupying the same areas.

“That the actions enumerated herein above are committed by the respondents with impunity, whimsically, in some case bullish, discriminative, and atrocious and continue to be meted [out] on the Basongora community unabated without any meaningful and conclusive intervention by the central government,” the petition partly reads.

The petitioners further claim that the central government grabbed their land when it gazetted it as Queen Elizabeth Game park in 1925. The popular Queen Elizabeth National Park is one of the best national parks in the country hosting incredible species and it is rated among the most biodiverse protected areas within the world. Some of the popular wildlife in the park include lions, elephants, buffaloes, antelopes etc.

The petitioners also complain about denial of access to watering points, rivers, lakes and hot springs, which supported traditional medicine for their community, thus disrupting their pastoral enterprise and with it the right to a livelihood in contravention of articles 21(1), (2)and(3) of the Constitution.