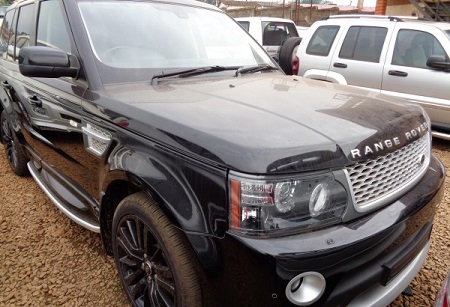 It’s not a tycoons’ thing to borrow one another’s rides! When a tycoon wants to ride the same way a colleague does, they usually simply acquire a similar ride of their own. And that defines what formed our deep shock at seeing Kwagalana group chairman Godfrey Kirumira cruising a state of the art Range Rover which we believed belonged to Jack Pemba!

The Range Rover in question, with the customized number plates that read- ‘ONLY 1 JP,’ is a 2015 model that Pemba acquired some time last year. However, for a while now, we have bumped into Kirumira cruising around town in the Range Rover, and he seemed quite comfortable. One such time was during the grand opening of the Pearl of Africa hotel, where Kirumira confidently entered the ride and drove off.

We immediately set out to find out how Pemba’s car had ended up in Kirumira’s possession; and a very reliable source told us Kirumira acquired the car after rescuing Pemba from an urgent financial situation.

Apparently the two moneybags had agreed that Kirumira would hand over the car once Pemba had paid back his dimes.