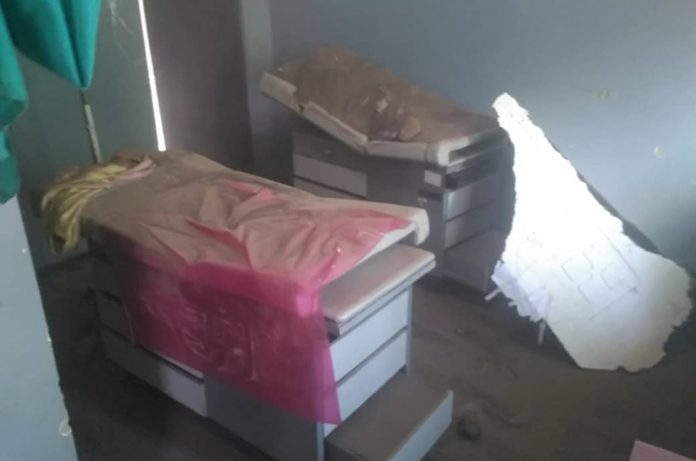 The Ceiling-board Collapsed on a Woman in Labor at Aromo Health Center III in Lira District. This could be avoided incident happened at a government health centre in Lira in Northern Uganda.
It has been established that no sooner had the Nurse moved out to get more gloves than the ceiling collapsed, narrowly missing the expectant mother who had fallen on the floor.

A woman identified as Easther Ajok of Oketkwer Village, Aromo Town in Lira was already on the labor bed waiting to deliver her baby when the incident happened.

She told Qfm, a radio station in Lira that she heard the ceiling cracking from above! Particles began falling on her and she immediately fell down and crawled towards the door. As soon as she fell, the broken ceiling hit the bed where she was lying.

She was immediately transferred to Lira Regional Referral Hospital where she delivered a bouncing a baby boy.

The Aromo Sub County Chief Ngwenomol Tonny said, he is deeply saddened by the incident adding that the council acknowledge the condition of the Maternity Ward and allocated 9 million shillings in the 2020/2021 financial year to renovate the ward since they cannot afford money to do it for the whole facility.

According to the Chairperson Health and Ecucation Committee for Lira District Local Government Judith Alengo, said, as council the deeply regret the incidence adding that in the next financial year, they will appropriate money in the budget for the general renovation of the Health facility.

The Maternity ward at the health facility was constructed in 2007 under Canadian Physicians for Aid and Relief (CPAR) project in Uganda and has never been renovated ever since then.