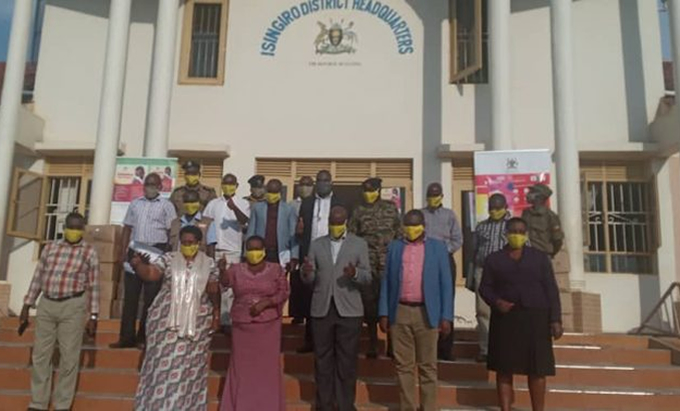 There has bee an uproar on the current distribution of government Masks as the colour of some masks has been subject to prejudice by other political parties. At the start of the exercise of making the masks that are distributed to Ugandans, the cabinet spokesperson and Minister for ICT and National Guidance Judith Nabakooba directed that masks should not be made in party colors.

Now in Isingiro, yellow masks have been distributed and yet the colour is associated with the ruling National Resistance Movement – NRM party. This has caused great uproar from Ugandans on different social media channels.

The distribution of masks in Isingiro was spearheaded by the State Minister for Health Robinah Nabbanja and at the event that was held Wednesday, yellow masks were distributed. At the same exercise, Minister Nabbanja was seen flashing a thumbs up, a finger gesture associated with the ruling National Resistance Movement (NRM).

The first consignment of the free government face masks came in white, black and other non-partisan colours when the First Deputy Prime Minister Gen. Moses Ali flagged off the distribution to border districts early this month.

The face masks will cost taxpayers shs 81 billion as revealed by Health Minister Dr Jane Ruth Aceng at the sidelines of the distribution flagging off.