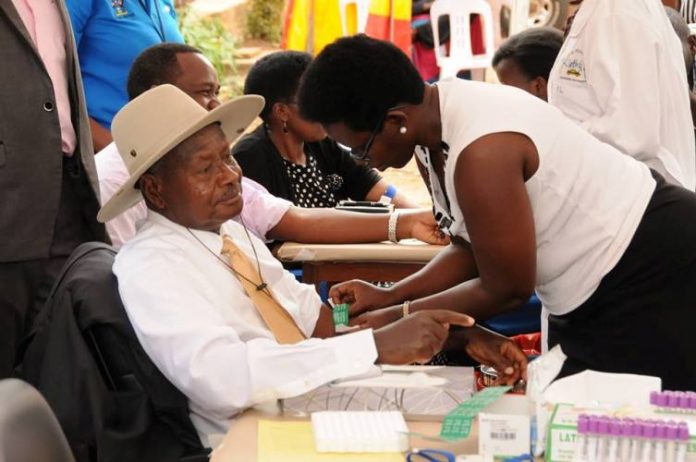 President Yoweri Museveni has committed himself to personally lead a new initiative that is hoped to eliminate the scourge of HIV/AIDS from Uganda by the year 2030.

The President will next week on June 6th launch what has been termed as the Presidential Fast Track Initiative on Ending AIDS in Uganda by 2030.

The initiative follows concerns by the President about the increasing prevalence of the killer disease in the last few years, despite tremendous achievements in the past.

In the early 2000s, Uganda was among the world’s top champions of the fight against HIV, having brought down its prevalence to about 5%.

The president and the NRM government were greatly praised globally for the achievement.

The scourge however has taken root once again, with the number of new infections jumping by 21% from 2005 to 2015.

According to Uganda Info, the most recent records tag the HIV Prevalence in Uganda at 7.1% with an estimated 1.5 million people living with HIV.

This trend has had President Museveni worried according to a statement issued Thursday by the Uganda Media Centre about the program launch; prompting him to take action, but himself.

“In line with the UNAIDS fast track strategy, the president has decided to directly lead efforts to end HIV as a Public Health Threat in Uganda by 2030,” the statement reads.

As such, the President “has provided a five – point plan to engender a renewed country focus which will drastically reduce new infections and achieve epidemic control in Uganda.”

President Yoweri Museveni “direct” leadership of this ambitious initiative, analysis might point out, implies that he envisages himself in his current position as president by the year 2030.

He his is however, fast approaching the presidential age limit of 75, and the currently constitutional provisions bar him from running again in the next election.

The Presidential initiative lists five focus areas, in this fight against the killer disease, namely;

Consolidate progress on eliminate Mother to Child Transmission of HIV

Accelerate implementation of “Test and Treat” and attainment of the 90:90:90 targets with emphasis given to men’s utilization of services