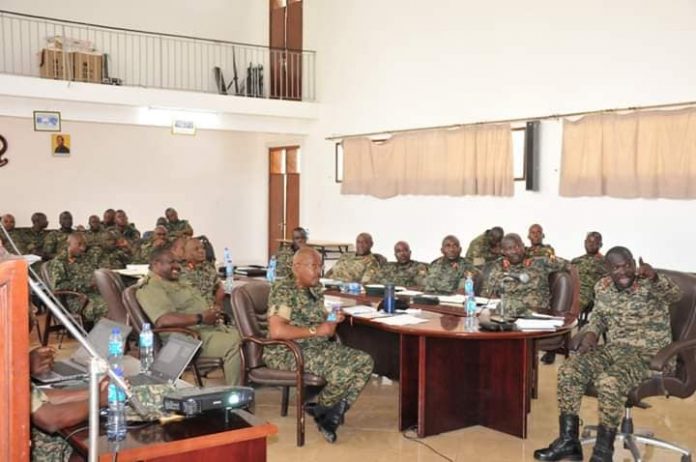 The Commander Land Forces (CLF) of the Uganda Peoples’ Defence Forces (UPDF), Lt Gen Peter Elwelu has on 5th March 2020 met all Division Commanders of the Force, Chief of Staff Land Forces, Independent Unit Commanders and Directors under Land Forces to evaluate the ongoing construction projects meant to enhance soldiers’ accommodation, recreation and health facilities in the fighting units across the country.

“Last year we set some construction priorities with immediate welfare benefits to the troops at the grassroots. Much has been done and it is time we reviewed and charted new priorities to continue improving on the welfare of our foot soldiers,” said Lt Gen Elwelu.

Gen Elwelu said that the UPDF leadership decentralized smaller construction projects to the end user units applying direct labour while the strategic headquarters undertakes major projects such as the ongoing construction of a UPDF National Referral Hospital in Mbuya. “In this way, we shall be able to achieve more from our budget allocation,” said Lt Gen Elwelu

The Commander Land Forces, under whose command lies the biggest bulk of UPDF troops said the Force has achieved much over the years because its leadership mastered the concept of prioritization within a meagre budget. “Our economy is still growing. We therefore set priorities to adequately realize the benefits of the resources available. A sum up of the small annual input we make is what has changed the face of the UPDF,” said Elwelu.

He noted that since 1986, the UPDF was involved in many military engagements to pacify the country and now that there is calm in the country, the Force has embarked on major projects to ensure the welfare of the soldiers.

“Our budget was heavily affected by our response to immediate security challenges at hand. Since the country is pacified, the welfare of our troops is one of our top priorities,” said Gen Elwelu adding that the UPDF has several welfare measures for both the troops and their families such as education, medical care, the biggest savings and credit organisation in the country and projects for wives of soldiers, among others.

Some of the construction projects undertaken by UPDF Land Forces over the past one year were renovation and addition of amenities in health facilities of Bombo, Kakiri, Hima, Pader and Gulu Barracks. Others were renovation of selected accommodation and recreation facilities in Makindye, Kakiri, Masaka, Moroto, Masindi, Mbarara, Nakasongola, Gulu and Pader Barracks. The meeting set new priorities focused mainly on health care facilities and accommodation of lower rank soldier.