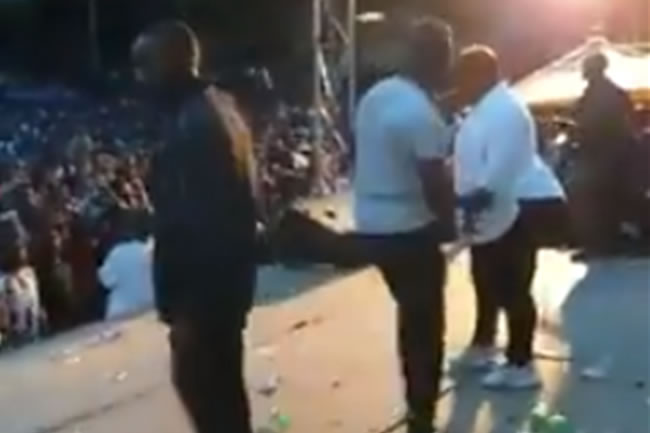 The newly appointed Presidential Advisors of President Yoweri Museveni have faced the rough of the fans and have been pelted with stones during the Xmas festivals. The two musicians Catherine Kusasira and Jennifer ‘Full Figure’ have had a day to curse when the fans in Masaka turned rowdy and pelted them with empty bottles during the Boxing day celebrations at Nabugabo beach.

Jennifer Nakangubi better known as Full Figure was the first victim to suffer the hostility of angry revelers earlier on in the day as she was not even allowed to get any close to the stage when furious fans chased her away from the venue before running for her dear life.

Later on at around 8PM, Catherine Kusasira made her way to the stage but she was surprised with flying objects accompanied by wild chants chasing her off stage.

She tested the deep waters of her new job and as soon as she stepped onto the stage, she got pelted with bottles. One of his bodyguards decided to protect the “nosense advisor” and she was forced off the stage before performing.

She first ignored the actions of the wild fans but as she continued to with her performance, the crowd was unrelenting and kept on throwing bottles on stage.

It has been established that it took over 15 minutes for the situation to normalize after fans hitting Kusasira. The organizers were forced to cut her performance short.

Though the reason for such actions by the fans remain unclear, the two follow fellow artists have gone onto the list of taunted NRM leaning musicians including Bebecool and Big Eye who have been victims of such actions.