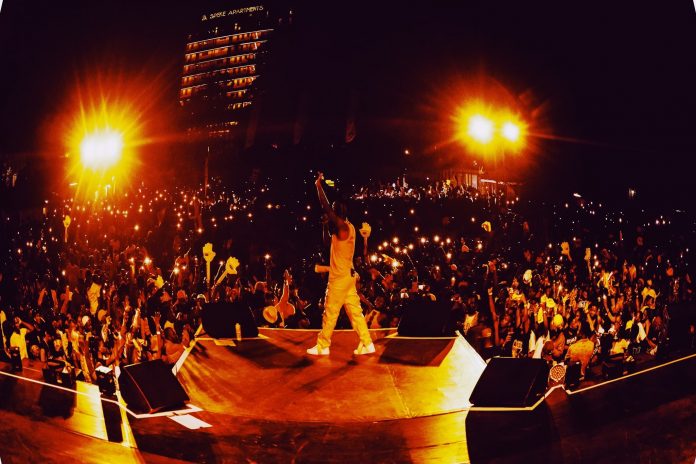 After the big flop of the first concert, Walukaga Shafiq alias Fik Fameica decided to make a comeback after revising his notes. He held a massive concert at Hotel Africana Kampala on the 26th of August.

The event attracted a mammoth crowd comprising all ages eager to see the Fresh Bwoy perform.

The singer had made great progress after releasing various hit songs like Kanzunzu,Buligita,Luv Luv, and many collaborations with other artists that have become anthems along the streets of Kampala.

Revelers flocked the event as early as 5 pm to catch up a glimpse of the Fresh Gang boss though stage performances were delayed. The DJs and MCs were seen keeping the crowd in the mood.

Later on, performances began by artists like Fille Mutoni who was joined by ex-boyfriend MC Kats which created whole lotta energy as the two hugged each other on stage.

The highlight of the night was when Bobi Wine, the former 2021 presidential candidate graced the show. The crowd was sent into a frenzy as he made a grand entrance to the event.

It was Geosteady performing at the time but he had to stop for a while because of the deafening screams made by the crowd after seeing the Ghetto president.

He was all smiles as always as he waved at the audience while the DJ played his songs until he descended to his reserved seat.

The stage performances continued smoothly by other artists as fans continued to enter until the place was crowded to full capacity.

At last, the long-awaited King Kong stepped on stage at around 10 pm looking dope in a white suit ready to give the fans what they came for.

The singer was seen doing what he does best. He gave in his all to offer the crowd, the best performance of the night.

Another one is yet to come says the Fresh Gang boss as he plans to organize another concert after the success on the night of 26th August. All went well and we are yet to see what’s next.